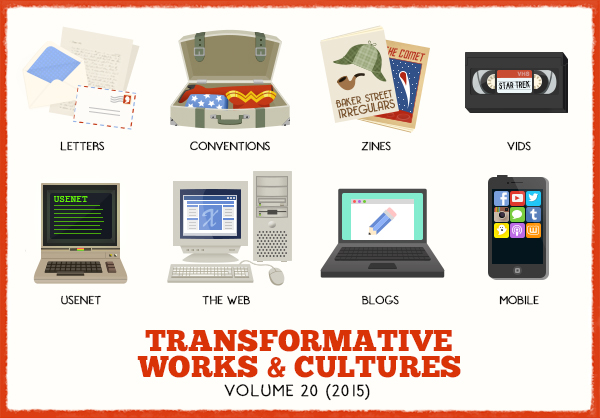 Transformative Works and Cultures has released their 20th issue. This milestone issue showcases the interdisciplinary nature of the field of fan studies and, as editors Kristina Busse and Karen Hellekson write: “offers us a moment to reflect on where we’ve come and where we want to go.”

The first collaboration between Busse and Hellekson, “which was conceived in early 2004 and began soliciting contributions in September 2004, moved quickly: essays were submitted and peer reviewed, and we received a publishing contract with an estimated print date of September 2005. Fan Fiction and Fan Communities in the Age of the Internet would not be published for another few months, but we had accomplished what we had set out to do: give voice to the many scholars we had met at conferences and online; create a volume that would start with the premise that academics were often fans and fans often academics and that that was okay; and permit conversations that did not always begin with introductory definitions but instead would assume a knowledgeable audience, thus raising the level of discourse.”

Ten years later, the Journal of Transformative Works and Cultures (TWC) continues to do just that.

Essays also discuss the genre of mpreg (Mary Ingram-Waters); the use of African American cultural studies in fan studies (Rebecca Wanzo); and pedagogy (Misty Krueger). Two essays discuss comic books, one with a focus on materiality (J. Richard Stevens and Christopher E. Bell) and the other with a focus on Japanese fan comics (Kathryn Hemmann). Materiality is also addressed in an essay about one-sixth-scale action figures (Victoria Godwin).

Symposium essays include personal essays about being of fan of singer Patti Smith (Maud Lavin) and about creative winter fashions made in in a Nunavik village in Quebec (Jasmin Aurora Stoffer). Another essay discusses fan recuts of films or film series (Joshua Wille).

The issue concludes with three reviews of recent books in the field of fan studies.

The next issue of TWC, No. 21, will appear in March 2016 as a special issue guest edited by Ika Willis on the Classical Canon and/as Transformative Work.

The following issues are open for submissions (close date March 15, 2016): open, unthemed issue; Sherlock Holmes Fandom, Sherlockiana, and the Great Game; and Queer Female Fandom. The calls for papers for the themed issues are available on TWC’s website.