This Week in Fandom, Volume 6

Well, it was another big week for fandom.  Let’s start by giving everyone a big hug. 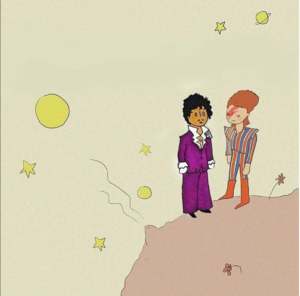 We’ve lost yet another legend this year: musical artist Prince. Numerous musicians honoured Prince during their latest shows, and social media overflowed with stories about how Prince’s version of Black masculinity helped innumerable people come to understand themselves.

Seeing a strong, unapologetically black man direct an audience of thousands and ultimately, my heart, made it clear that being yourself could take you further than being an approximation of someone else.

—Terryn Hall for the Guardian (Warning: don’t read the comments.)

The loss was a painful reminder to appreciate the legends that are still with us, including artists from younger generations.  Living luminary Beyoncé released her highly anticipated ‘visual album,’ Lemonade, on Saturday, with a replay on Sunday, just before the equally anticipated season premiere of Game of Thrones. (That’s a non-affiliate link, but readers in the U.S. can support the OTW through AmazonSmile by making us your charitable organisation.) It was a big night for breaking chains.

Lemonade is, on its surface, the story of Beyoncé coping with her husband’s infidelity. (Bey and Jay have not confirmed that the album is based on true events.) It is also a celebratory exploration of Black identity in America, the experience of being a woman, and, most of all, the intersection of those identities.

The album’s ‘Sorry‘ includes the line ‘He only want me when I’m not there/He better call Becky with the good hair,’ leaving the world asking Who is Becky, and how dare she? Obscure fashion designer Rachel Roy (R-O-Y) implied on Instagram (since deleted) that she might be Jay Z’s side piece. The Beyhive, Beyoncé’s much-maligned and extremely passionate fanbase, was unfortunately a bit overeager in their response, and many (so many, guys) Twitter users verbally attacked Rachel Ray (R-A-Y, the celebrity chef.)

I want yall to stop calling Rachel Roy Rachel Ray bc Rachel Ray is a thick Sicilian woman who is a blessing.

(We won’t be linking to any un-deleted hate at Rachel Ray, but you can imagine what she was put through.)

Rachel Roy (R-O-Y again) didn’t escape without injury, of course. She and her family have received threats and have been subjected to verbal abuse, driving them off the internet. (Here’s an example of what the Beyhive’s dark side has been up to. Warning for possibly gendered insults.)

Back-to-back Lemonade and Game of Thrones was emotionally overwhelming for many viewers, but Twitter of course used the experience to bring the laughs:

(And another great tweet, which contains mild spoilers for the episode.)

So, if you’ve been wondering why your friends are talking about Becky or tweeting lemon emoji, now you know!

Game of Thrones was characteristically cruel, leaving the long-term result of last season’s cliffhanger up for debate, and it isn’t clear how the episode’s biggest reveal will affect Westeros’s future. Helpful tip: don’t watch this episode with your grandmother.

Don’t have HBO?  We’ve got other ways to keep you entertained.  Three Patch Podcast, which discusses the BBC’s Sherlock as well as issues relevant to all fans, held a very interesting roundtable the week before last (whoops): Fandom Life & Public Identity. It’s a great listen, but skip it if you’re not a fan of ‘adult’ language.

Many Castle viewers are …well, horrified might be too strong, but… Many Castle viewers are horrified by the news that the show’s non-titular star, Stana Katic, wasn’t asked to return for the show’s ninth season, nor was her co-star, Tamala Jones. Several fans have publicly suggested that TPTB undervalue women leads, a problem that appears to affect a number of primetime programmes in the U.S. (No links because calling attention to social justice posts can have negative consequences for the posters.)

In what’s widely considered better news, the next Companion has been announced! Pearl Makie will be playing ‘Bill’ in the Doctor Who reboot’s upcoming tenth season.  Social media’s pretty pleased with the decision, and we’re excited to see Makie in action.

AH! PEARL MACKIE, ,WHY U SO AMAZING?! #DOCTORWHO https://t.co/ZHNYVs8eUG

Finally, NCIS fans, signups are open for the NCIS Big Bang 2016.  According to the site, ‘Your story must be based on NCIS characters,’ cannot be posted in part or in full before the scheduled posting date, and must be beta’d.  Read the full rules before you sign up, and then go create!