This Week in Fandom, Volume 41 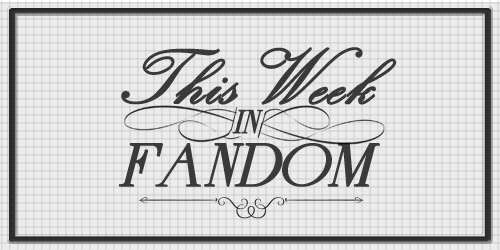 Welcome to This Week in Fandom, the OTW’s weekly roundup of things which are happening. Before we start, did everyone enjoy International Fanworks Day? We had a blast hosting games, seeing your fanwork recommendations, and checking out the mini fanworks you all created to celebrate! But remember, this isn’t just an OTW thing–IFD is for everyone to celebrate however they want, so why not start your own tradition next year?

Forbes published an article about the business of fanfiction. The article quotes some people who have written guest posts and anniversary posts for the OTW before, which is pretty cool. It focuses on the Fifty Shades of Grey series, of course, and goes through the history of professional publishing by fanfiction writers.

“Though fanfiction writers who go professional represent a very small minority of fans, it’s hardly a once-in-a-lifetime phenomenon. So why is it treated as such? The obvious explanation is that fanfiction authors are usually written off… Romance is the most common fanfiction genre, and fanfiction and romance readers are predominately female… But from a commercial standpoint, James has elevated the legitimacy of fanfiction and the entire romance genre. Even if publishers or fanfiction outsiders don’t understand why millions of readers enjoy fanfiction, money talks.”

Bustle echoed this theme with an article on why shaming fanfic is a feminist issue. The article describes the feeling of panic that so many fanfic authors feel when they contemplate the possibility of their work being discovered. Why is that such a common feeling, though? The article explains that “Of course, I see now that both my eagerness to write fan fiction and my shame for it were borne of the same thing: a large amount of fan fiction is centric on female desire.” And, of course, “Women have been historically shamed for owning their desires, but while we recognize that, overcoming it remains an uphill battle.”

The article goes further than that, elaborating on the effects of this shaming: “If you don’t think that fan fiction shaming in particular is a feminist issue, then consider what we’re really doing when we shame fan fiction writers: we are shaming women — often young women, who are just starting to get a sense for what they want not just in a narrative, but in their adult lives — for expressing their desires.”

What are your thought on this topic? Do you feel shame and panic at the thought of people knowing what you create? Or are you able to overcome that, to say that hater are gonna hate and go on with your writing? And, if you can do that, how do you manage it? Tell us in the comments.

I don’t know about you folks, but I’m rather enjoying these conversations.

I have had the best most fulfilling nerdy conversation about books, comics, fan fiction and feminism with my mates kid sister.

A slightly different approach was taken in an article written for Sixth Tone (and republished on China Film Insider) about the Mary-Sue-esque main characters in Chinese television Dramas. The article even quotes from Transformative Works and Cultures on the origin of the Mary Sue trope, which has become popular in Chinese media. “Mary Sue enjoys a better life in China than she ever did in the United States, where she was born,” the article says. “Endowed with stunningly good looks, sex appeal, and almost saintly kindness, she is what every female writer aspires to be — except for her astonishing lack of depth.” While the article acknowledges the popularity of Mary Sue characters among young women–including those in fanfiction communities–it is critical of the effect this trend has. “Yet while it is good that Chinese TV dramas are finally telling stories from a woman’s perspective, too many narratives depict the desires of women in traditional terms… Why, as viewers, do we not dare TV executives to challenge us a little, to offer us modern women in truly innovative roles?”

Mary Sues are definitely controversial. There is an ongoing debate about whether they are limiting or liberating, and a consensus is not likely to be reached anytime soon. Let us know what you think in the comments!

And to cap this all off, did you know that Survivor is about to start is 34th season? I just had to share my astonishment about that. And my astonishment that, even with that many seasons, the Survivor Fanlore page is empty (hint hint).