This Week in Fandom, Volume 18 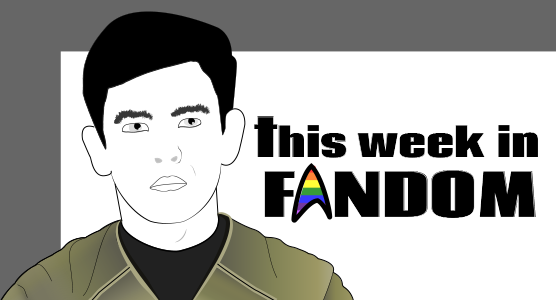 After a week off from This Week in Fandom, we’re back, and this week we’re discussing a question that has been on a lot of people’s minds lately:

‘What is the point of pop culture in a world gone mad?’

Entertainment reporter Vinnie Mancuso searched for the answer in a poignant article for The Observer, confessing, ‘As Diamond Reynolds took to Facebook live inches away from her dying, bleeding boyfriend Philando Castile, killed seemingly for the crime of not looking like the man in the video with gun outstretched, I wrote—I complained—that we’d have to wait a little longer from Game of Thrones season 7.’

It’s a troubling dichotomy that many of us may find relatable as we struggle with the morality of sharing updates about our favourite shows immediately after sharing our opinions on the latest real life horror. It’s also something that we discuss within the OTW, when we have posts scheduled to go out the morning after another such horror. I made the decision to pause our retweet schedule (back when we had a retweet schedule) during and after the November 2015 terrorist attack on Paris, because survivors and their loved ones were using Twitter to find and share valuable information. Should we stop tweeting every time a city is attacked? Should we go silent after every hate crime that’s committed? (As the New York Times asks, are there places where Pokemon should not go?)

As fans, we know why pop culture matters. We’re reminded by every person who attacked Leslie Jones on Twitter. We’re reminded when we’re told that Hermione Granger can’t be Black or Steve Rogers can’t be bisexual. We’re reminded when they tell us that Lexa is ‘just a character’ and that we shouldn’t demand an end to burying your gays, to fridging, to whitewashing every single film. Representation matters. Pop culture is often a mirror, but it also influences us, both overtly and insidiously. It gets inside of us, moulding us, and we have the right—we have the responsibility—to mould it in return. Mancuso urges us:

Pop culture doesn’t exist to save lives, but it can be a reminder that every single life is as valuable as your own. Just think to the last time a piece of art truly moved you, and realize there’s a good chance it moved someone half a world away. Realize that right now a white child is fervently hunting the same Pokemon down the street from a black child. Realize there’s no barrier between the things we love, the things we care for, even the things that f[***]ing piss us off other than the ones we recently started to imagine between us. Realize we’re all of us worth the same damn amount.

Fandom is about love. Yes, there are people who poison it with hate, with their own human intellectual and emotional failing, and yes, we live in societies that were built on injustice, and we cannot entirely escape the thought patterns we were taught in order to perpetuate that society. But fandom can help us explore our biases and overcome them. Fandom can help us fight the internalised bigotries that lead to self-loathing. It matters that children today have Doc McStuffins. It matters that Sulu has a husband, and it matters that we as fans can be unsatisfied with that representation.

And honestly, are there places where Pokemon shouldn’t go? Or do cultural phenomenons bring us together? Tell us your thoughts in the comments.

I know that, as troubling changes rock the U.K. and the rest of the world, I’m personally comforted to know that we have Pokemon in high places.