This Week in Fandom, Volume 133 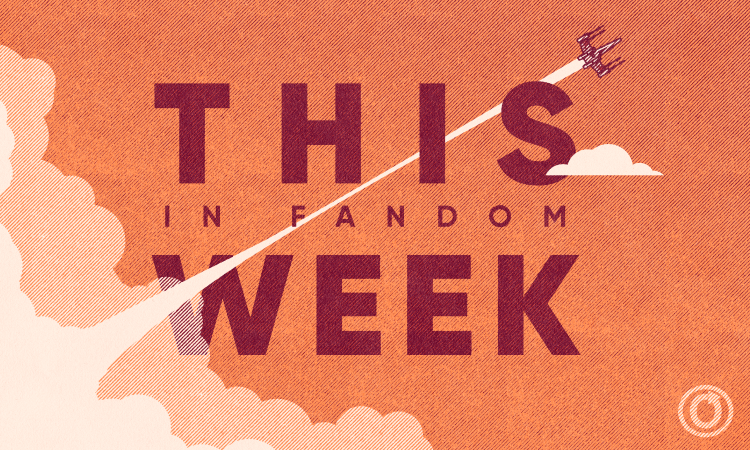 Hello and welcome to This Week in Fandom, the OTW’s roundup of things that are happening. Before we get started, did you see io9‘s interview with The Witcher creator Andrzej Sapkowski? It’s chock-full of entertaining content, perhaps the most relatable of which is Sapkowski’s acknowledgment that he wasn’t very involved in the development of the Netflix show because ‘I do not like working too hard or too long’. We feel you, buddy. Did you enjoy the interview? Let us know in the comments!

And now: those based in the UK, as is your friendly OTW comms blogger, may feel that they’ve heard quite enough about Meghan Markle and Prince Harry’s decision to leave the royal family. On the other hand, there’s a fandom perspective on everything. That’s the tack which journalist Eleanor Peake took this week in an article for the New Statesman, which explores the ways that Meghan and Harry’s departure from the British royal family has impacted “royal-watchers” online. Peake interviews Reese, who runs a royal family podcast, explores fan communities on Tumblr and Facebook, and begins to ask some interesting questions about the relationship between celebrity fandom and what’s essentially RPF. The article also notes that responses to Meghan (both before and after the announcement of the split) are often underpinned by ‘racist’ commentary that takes a toll on black and mixed-race fans. ‘We’ve just been telling each other to take breaks and protect our mental health,’ Reese says.

Chris Chibnall’s first season as Doctor Who showrunner, which aired between October and December 2018, took it pretty light on the show’s multi-year mythology and focused primarily on introducing Jodie Whittaker’s 13th Doctor and her companions Ryan, Graham, and Yas. However, when the first episode of the current season was aired on 1 January it became clear that things were a little different this time around; and the latest episode, ‘Fugitive of the Judoon’, took that up to 11. Viewers were shocked and delighted as Chibnall brought back longtime fan favorite Jack Harkness in a surprise appearance, and then further wrongfooted when the episode took an extra twist and revealed that apparent civilian Ruth Clayton was (somehow!) the Doctor herself. The move makes Jo Martin, an established British television actor, the first black Doctor. It also sets up a compelling mystery to be unraveled over the rest of the season.

TV reviewers loved the episode (Dan Martin in the Guardian called it ‘psychedelic and awesome’; Devan Coggan at Entertainment Weekly described it as ‘a jaw-dropping spectacle’) and fans online shared their excitement, taking to Twitter to praise Chibnall’s work and air theories about what might be happening.

Meanwhile, Wales Online has a nice little piece about Torchwood fan Carol-Anne Hillman, who maintains ‘Ianto’s Shrine’, an IRL memorial to character Ianto Jones. Carol-Anne talks about her experiences as guardian of this fan-created site and about her involvement in fandom more broadly, writing fanfic, attending conventions and creating links with other fans worldwide.

Next up: since The Rise of Skywalker was released, many in the Star Wars fandom have been grappling with disappointment about the conclusion to this decades-long story. It’s perhaps inevitable that the resolution to a popular franchise won’t please everybody, but Dom Nero at Esquire this week took the opportunity to examine the issue more closely. In his article, Nero explores how fans have sought to console themselves by ‘crafting conspiracies’ about the better movies whose ghosts haunt this one. Nero mentions the popular theory of a ‘JJ Cut’, a version that director JJ Abrams had to tone down and tune up to Disney standards, as well as the developing interest in what the movie would have looked like under Colin Trevorrow, who was originally named as its director. Nero has little time for either theory: he dismisses the ‘JJ Cut’ as having ‘no basis in reality’ and the speculation around Trevorrow’s work as ‘nothing more than wishful thinking’. (The article doesn’t acknowledge the full extent to which Trevorrow’s script, titled Duel of the Fates, has been leaked.)

Certainly, it’s true that, as Nero argues, ‘Abrams’s The Rise of Skywalker is the movie we got’. It might even be true that, as he goes on to say, ‘Anything else is just fan fiction’. We just land somewhere a little different than he does on the value of this ‘aggressive fantasising [sic]’. Sure, creators can’t please everybody and it’s certainly not necessary for fans to launch personal attacks on those associated with particular films or studios for failing to deliver the content they want. But it’s equally true that even though ‘Movies are often bad’, that doesn’t have to be the last word on the matter; and that contrary to what Nemo says, it isn’t ‘unrealistic for every fan to feel entitled to his or her own version of Star Wars‘. That’s exactly what fanfiction – sorry, ‘just’ fanfiction – can provide.

And finally, it was the Grammy Awards this week, the best part of which, as with all awards ceremonies, is often (whisper it) the fashion. This year was no exception, with Billy Porter, Lil Nas X, Billie Eilish, and Ariana Grande bringing some serious looks and prompting this insightful observation on Twitter. Pop culture criticism! It never sleeps!