This Week in Fandom, Volume 128 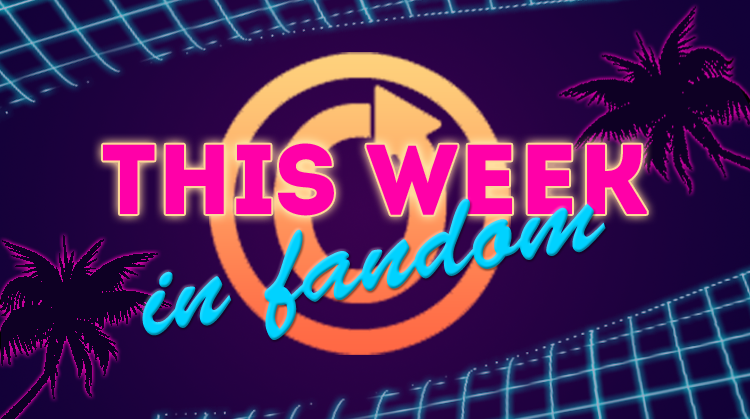 Welcome to This Week in Fandom, the OTW’s roundup of things that are happening! Before we start, the Wonder Woman 1984 trailer was released this week! Are you as excited about it as we are? Leave your thoughts in the comments!

Our first news story of the week concerns the upcoming Yahoo Groups closure, originally scheduled for December 14. Since Verizon announced the closure in October, the OTW has been working in support of fandom efforts to preserve as much content from the platform as possible; you might have heard the chair of our Open Doors committee on an NPR segment on December 9, or read the open letter we recently sent to Verizon asking them to extend the closing deadline.

In fact, Verizon did just announce an extension of the deadline to download content; not until May, as the OTW was asking, but until the end of January. However, it’s not unmitigated good news. The extension will only allow individual users to make downloads using Verizon’s own tool, which is text-only, doesn’t capture photos or attachments, and isn’t accessible to the many volunteer groups that have been working to preserve the fandom history captured on the site. Indeed, as a number of outlets reported, Verizon recently blocked members of one such group, the Archive Team, from the site altogether, accusing them of violating its terms of service. It’s a frustrating turn of events.

The rest of our news is a little lighter, starting with Crisis on Infinite Earths, the crossover event running on the CW’s Arrowverse shows from 8-10 December and concluding on 14 January. The showrunners have been having a good time testing the limits of that ‘Infinite’, incorporating characters and actors from DC shows that sit well outside the established Arrowverse limits. Characters from Black Lightning and Titans have both put in appearances, as well as Burt Ward, who played Dick Grayson in the 1960s Batman series, and Smallville‘s Tom Welling and Erica Durance. This is the kind of ambitious crossover we’ve been waiting for: why shouldn’t we see every one of the shows we enjoy, all on our television screen simultaneously? Dare we say it? Superwholock rise!

We wrote last week about the forthcoming Star Wars: Rise of Skywalker release. In the wake of some enthusiastic contributions from the cast members concerned, internet discourse has turned this week to FinnPoe and the question of LGBTQ+ representation. Writing for Nerdist, Lindsey Romain offered a potted history of FinnPoe and its fandom; meanwhile, over at Digital Spy, Gabriella Geisinger lamented JJ Abrams’ declaration that the ship would not go canon and hoped that the director’s ‘hints at LGBTQ+ representation’ wouldn’t go the way of similar teases in other big-budget franchises (yes, Disney/Marvel, we’re looking at you). Throwing some judicious shade at That Gay Scene in Avengers: Endgame, Geisinger writes, ‘in a world where ambiguity is viewed through the lens of heteronormativity, it is worth taking a definitive and triumphant stance.’ One thing’s for sure; John Boyega is keen.

An unexpected treat this week was a Mary Sue interview with Noah Segan, who plays Trooper Wagner in Knives Out (which was released November 27). The movie is a genre piece which speaks to writer-director Rian Johnson’s enthusiastic fan feelings about classic murder mystery; and (piling fandom upon fandom) Segan’s character is himself a fan of Harlan Thrombey, the fictitious crime writer whose fortune, works, and memorabilia-stuffed mansion are at the centre of the plot. In this interview, Brittany Knupper takes the opportunity to explore Segan and Johnson’s own fan status as well as the character’s status as an onscreen representation of the fans in the audience. “It’s very sweet,” Segal opines; “Rian… wants people to know that we love the genre.”

And finally, a Buzzfeed list that caught our eye: ’24 Tweets Every Fanfiction Reader Will Get’. We felt personally called out by some of these. Do you?!