This Week in Fandom, Volume 117 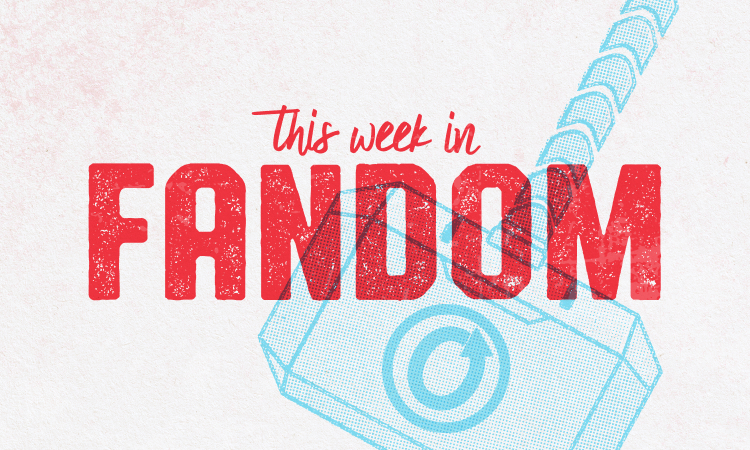 Okay – on to Comic-Con. Marvel Studios took advantage of their Hall H panel on 20 July to announce more details about their upcoming Disney+ streaming series, cast details for some movies that we knew were coming, and some new titles which hadn’t been revealed before. Highlights included news that Natalie Portman will rejoin the MCU for the fourth Thor movie, Love and Thunder, written and directed by Thor: Ragnarok‘s Taika Waititi. In a storyline based on Jason Aaron’s Thor: God of Thunder comics, Portman’s character Jane Foster will be wielding Mjolnir as ‘female Thor’. Portman, who had previously seemed unlikely to return to the MCU, suggested on Instagram that she has some working out to do before she takes up the role:

Tessa Thompson also excited fans with the suggestion that Valkyrie, new King of the Asgardians, would be looking for ‘a queen’: an announcement which Kevin Feige later confirmed as signalling that canon LGBT+ content was on its way.

In general, Phase 4 seems set to bring more diversity to the MCU; whether through the cast of the Eternals (Angelina Jolie, Richard Madden, Kumail Nanjiani and Salma Hayek), through Mahershala Ali’s Blade (the announcement of which suddenly made this 2015 Tumblr post seem incredibly relevant), or through a movie that will introduce a new Asian-American leading man to the MCU. Shang-Chi and the Legend of the Ten Rings will be released in February 2021 and will star Canadian actor Simu Liu in the title role, with support from Tony Leung Chiu-wai and Awkwafina and direction from Destin Daniel Cretton. Liu, who was previously best known for his role in the sitcom Kim’s Convenience, became the social media hero of the day as he reposted an old tweet with a good deal of relevance:

Thanks for getting back to me https://t.co/FFRuM03p20

Liu’s success prompted other Twitter users to ‘Simu Liu’ for themselves:

Everybody do a @SimuLiu today.

Shoot your shot. Speak out your dream job right here on Twitter. Tag the people who can make it happen. Don't even give a eff.

Elsewhere at Comic-Con, Lin-Manuel Miranda declared his daemon to be a ‘pizza rat’ as he joined castmates including James McAvoy and Ruth Wilson, as well as screenwriter and Harry Potter and the Cursed Child co-author Jack Thorne, at a panel for the HBO His Dark Materials adaptation; Supernatural stars Jared Padalecki and Jensen Ackles got teary-eyed at the last ever SDCC panel for their long-running CW show; and Star Trek fans got their first look at the trailer for Star Trek: Picard, the first new content on the primary Star Trek timeline since 2002’s Star Trek Nemesis.

Fans of Veronica Mars got lucky this week (or did they?) as the show’s eight-episode revival season was released early on Hulu. In an article for Vox, Constance Grady explores the ‘passionate… vocal fandom’, which kept Veronica investigating through two cancellations, and the often-fraught relationship between the show’s fans and its creators. As Grady writes, the push-pull of ownership and the struggle to satisfy a vocal fanbase is becoming increasingly common as a pattern for viewer engagement; a relationship of mutual frustration where both fans and creators feel like the other party could do, or be, better. If that’s true of Veronica Mars, the confrontation seems to have come to a head in the revival’s final episode, which killed off Veronica’s longstanding on-off love interest, Logan Echolls. A quick dip into the #VeronicaMars tag on Twitter shows fans stunned by the decision; but for creator and showrunner Rob Thomas, Logan’s death was essential if the show was to continue, as he hopes it will. ‘Unless you’re playing a soap,’ he says, ‘what do I have to do with the husband or boyfriend of my detective?’

Even if you’re not a Veronica Mars fan, Grady’s article is worth a look; it explores not only the relationship between fans and creators but also ways that fandom plays into an individual life, and the conflicting responses that Grady’s dual role as TV critic and fan called out of her when she saw the controversial finale.

And finally, if you’re an Archive of Our Own user, we have a survey request for you! Xu Yechen of the University of Tokyo is conducting a research project into the tagging system used on the site. If you’re aged 16 or above and can spare a few minutes to contribute to Yechen’s information studies research, you can click through to access the survey here. We will circulate the research findings, once they’re available, in a future edition of TWIF.