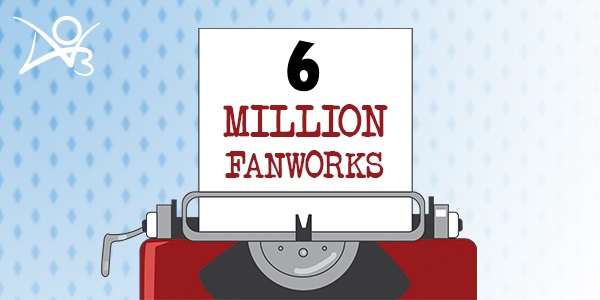 As you may already know, we’ve been busy here at the OTW over the last few months: usage of AO3 has risen significantly since much of the world went into lockdown (you can learn more about it in this stats post). With that in mind, it’s not surprising that we’ve hit our next major milestone. Yes, that’s right! We now host six million fanworks on the Archive of Our Own!

The AO3 launched in November 2009. It took 54 months – or four and a half years – before we reached the first million fanworks, in February 2014. The gaps between the milestones have been decreasing ever since; we hit two million in December 2015 (22 months), three million in April 2017 (16 months), four million in July 2018 (15 months), and five million in July 2019 (12 months). And now here we are just 10 months after that, celebrating our six millionth fanwork. Any bets on when we’ll reach seven million?!

Six million is a huge number – so big that it’s hard to conceptualise. But every individual fanwork is the product of somebody’s time, thought, and imagination. We’re so grateful to all of you, the fan creators and fanworks consumers who continue to make the Archive such a lively, enjoyable community. And if you’d like to celebrate by recommending one (or six!) of your favourite fanworks in the comments, we’d love to hear about them!

4 thoughts to “The Archive of Our Own Hits Six Million Posted Works!”