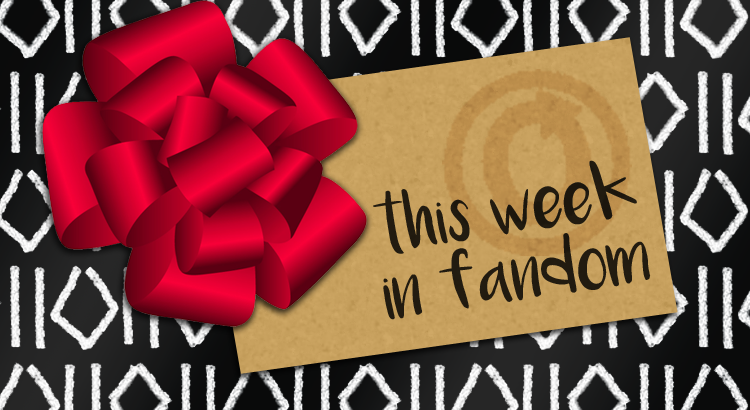 Welcome to This Week in Fandom, the OTW’s roundup of things that are happening. This will be the last TWIF of 2019 – we’re back on January 7 – so we’d like to take this opportunity to wish all of our readers season’s greetings and a happy new year. What has been your fandom highlight of 2019? Let us know in the comments! (Here’s ours…)

We were also feeling the festive cheer this week at GQ.com, where Gabriella Paiella offered up ‘an oral history of the Folgers Incest Ad’. If you haven’t seen the ad (in particular, if you’re outside North America), it’s worth taking the time to learn a little more about this much-parodied piece. We like the article because it’s interested in why some media properties prove so fertile as inspiration for transformative works: not only parody and memes, but fic. Alongside her interviews with the team members involved in making the original advert, Paiella speaks directly with a number of fanfiction writers to get their perspective on what prompted them to contribute to the “Folgercest” fandom. More of this type of thinkpiece, please!

END_OF_DOCUMENT_TOKEN_TO_BE_REPLACED

Welcome to This Week in Fandom, the OTW’s roundup of things which are happening! Before we start, the the 2019 Oscar nominations have been announced. What are your predictions for who will win?

It’s been over a month since the Tumblr Purge, and the long-term effects are starting become apparent. The Mary Sue published an article examining the effects the purge has had on fandom specifically. The article states that there appears to have been a decrease in activity on the site.

What’s clear is that there’s been a fractious exit from Tumblr, with those who have left scattering to distant corners and no one clear alternate platform able to replace what Tumblr had been.

Tumblr isn’t totally dead, of course. Many people have remained, but from my perspective, there’s been a noticeable slowdown in activity.

END_OF_DOCUMENT_TOKEN_TO_BE_REPLACED

Hansi Oppenheimer is a Filmmaker & Fangrrl committed to supporting and promoting underrepresented voices in Pop Culture. She has been called a the “By-any-mean necessary-MacGyver of no budget documentaries” and her films, the Rashomon of documentaries with their focus on oral history and on fan recollections. Today, Hansi talks about the collection of activities under her Squee! project.

In 2012 I discovered fanfiction and wanted to explore that as a topic for my next project. I was reading academic works but I was having a really difficult time getting anyone to discuss writing fic on camera and was told that many writers felt they had been burned by the media and its focus on slash. I was more interested in exploring why fanfic existed: some of it offers opportunities for representation and diversity, some is just for the joy of creating a “what if” story and some of it is just for fun and wish fulfillment. I support all of these approaches.