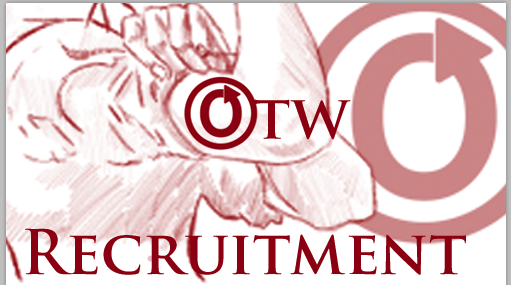 Can you code, write documentation or organize things? The Organization for Transformative Works is looking for AO3 Documentation staff, AD&T Coding volunteers, and Tag Wrangling volunteers!

We would like to thank everyone who responded to our previous call for Translation volunteers and Communications staff. Today, we’re excited to announce the opening of applications for:

We have included more information on each role below. Open roles and applications will always be available at the volunteering page. If you don’t see a role that fits with your skills and interests now, please check back in 2017 for our next openings.

If you have questions regarding volunteering for the OTW, check out our Volunteering FAQ.

END_OF_DOCUMENT_TOKEN_TO_BE_REPLACED

An unofficial Archive of Our Own Android app was recently released to Google Play. As this release has brought the subject back into the spotlight, we wanted to take this opportunity to share the current state of official AO3 app development.

“Have you thought about making an app?” is one of our most frequently asked questions, but in mobile app development, there isn’t actually such a thing as “an” app. Apps need to be built for different mobile platforms — Android, iOS, and Windows Mobile being the top three — and for the many versions of those platforms still in use.

Before we could even start developing an app that would allow you to do anything more than browse unrestricted works, we would need to develop a public API — definitely on our roadmap, but several major releases away. Then, we would need to build different, responsive user interfaces for both phone and tablet. What seems like a small, straightforward project evolves very quickly into something needing many resources, dedicated ones, with diverse skill-sets. While we have said in the past that we’d like to release a mobile AO3 app, the required resources just aren’t available.

The coders who develop the Archive all do so on a volunteer basis, and give as much time as possible to support its growth — but that time is limited, and fully consumed by the work needed to keep the Archive running smoothly. Either the team spends time continuing to improve the Archive, or developing an app — there simply aren’t enough volunteers to support both.

It’s not just the initial development that would be resource-intensive. An app would need to be maintained and continually updated to ensure it keeps working as new versions of each platform are released — not to mention enhancing the app to include new and improved Archive features! And because an app would require long-term maintenance by a dedicated team, it’s not something we can reliably fund with donations.

But coding and testing resources don’t even begin to scratch the surface of what would be needed to support an app! Resources would also be needed from the following teams:

Not only would this be more resources than we currently have available, it would also pull team members away from working in support of our roadmap.

Our team’s goal is to keep the Archive available and accessible to as many people as possible. The best way we can do so is by focusing our efforts on building a single, responsive version of the Archive that works (and works well!) on as many devices as possible. We are eternally dedicated to ensuring that this includes devices of all shapes and sizes, and will continue to focus resources on enhancing the site’s mobile responsiveness and usability for all. That means a standalone app just isn’t possible at this point in the Archive’s development.

To close on a security note, if a third-party app or website requests your AO3 login information, please proceed cautiously and be aware that you are providing this information at your own risk. While there are no current security concerns, please be sure to change your password if you believe your account may have been compromised at any time.

Now that our membership drive has wrapped up (thank you, everyone!) we also want to give you a wrap-up reminder of our April Showers fandom celebrations from this year.

Below, we’ve collected the links to every fandom post we made, along with links to each fandom’s AO3 and Fanlore pages, so you can make sure you didn’t miss any of them. And the April Showers Recs (2015) collection has recommended works in dozens of fandoms, so you can make spring last as long as you want!

We’d love to thank each and every one of you who reblogged, retweeted, liked, and clicked on any of our tweets or Tumblr posts… but that would take too long and would get in the way of your checking out all the great fandoms listed here. Enjoy!

Most notable posts from the AO3 tumblr: