Survey Sunday #4: Awareness of the OTW, Projects, and News

This week on Survey Sunday, we’re taking a look at some stats regarding news outlets and awareness of the OTW.

These questions read as follows:

All the graphs and discussion here represent final numbers for these questions. Readers may notice that this set of questions has a very high rate of people skipping the questions compared to other questions in the survey. Survey fatigue likely accounts for some of the skips appearing in today’s set of questions. However the final questions about the OTW website actually had fewer people skipping them and 36% of all survey takers took the time to write in answers for the final survey question, so this is probably not the primary reason. One of the responses to that final question pointed out that the survey should have included more “not sure/don’t remember” options so, as will be seen in discussion of Question #83 below, a good many of the skips likely indicated that the respondent simply wasn’t sure of their answer. In addition we’ll discuss how the survey structure led some people to never see some of these questions. 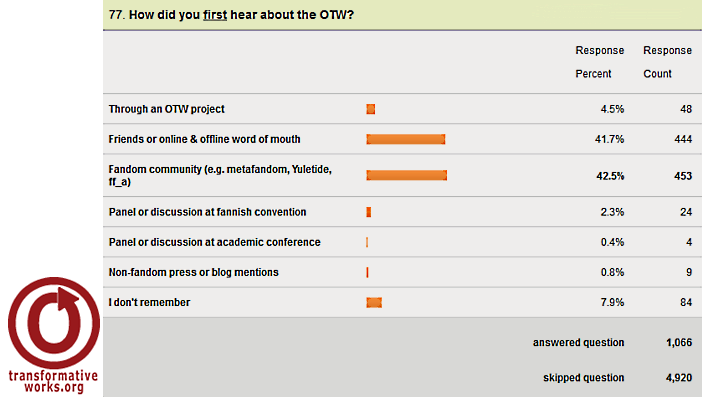 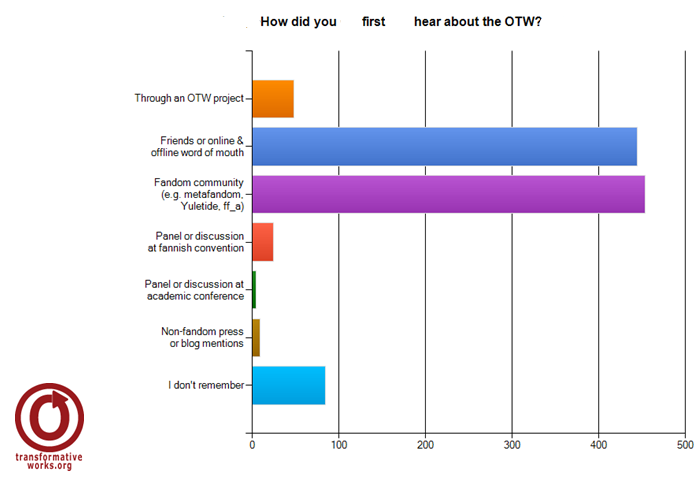 The survey questions to come suggest that another major reason for the skips to this question is that many survey respondents had never heard of the OTW before taking the survey, and the option “Only heard of it today” was not available. 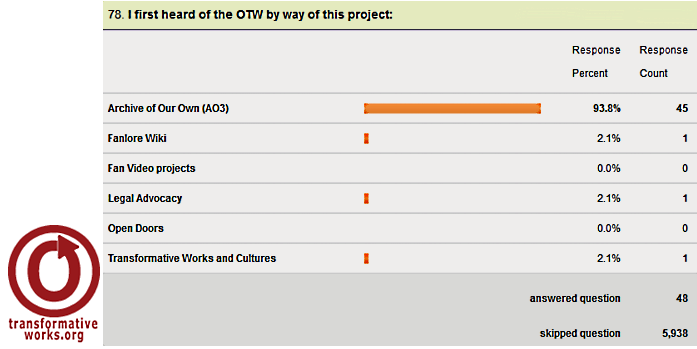 Question #78 had an enormous number of skips because only the 48 people who answered “Through an OTW project” in the previous question were offered this question. Not surprisingly, the AO3 accounted for almost all the responses, 45 or 93.8%. The remaining 3 respondents selected either Fanlore, Transformative Works & Cultures (TWC), or Legal Advocacy. 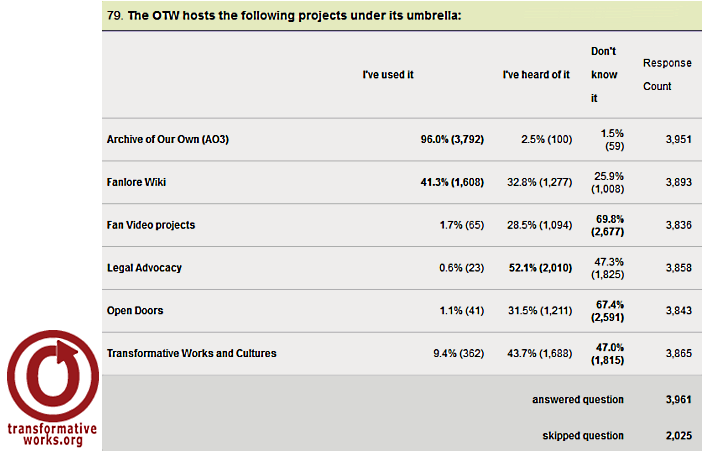 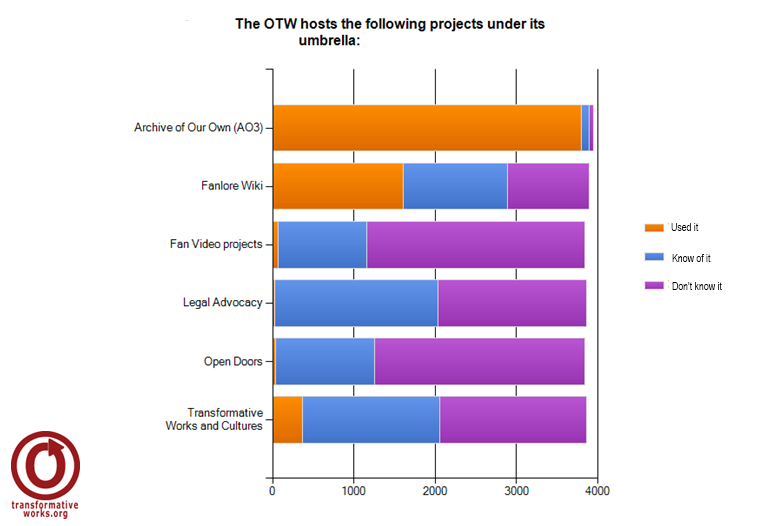 There was a huge drop off when it came to use of the OTW’s other projects, however this was largely due to the restricted circumstances under which someone would do so. For example, while 52.1% of respondents knew of the OTW’s Legal Advocacy efforts, only 23 (0.6%) claimed to have directly benefited from them. Similarly, 31.5% (1,211) of respondents knew of Open Doors, though only 41 (1.1%) had used it. The OTW had just completed its first import, from the Smallville Slash Archive, the month before.

The Fan Video projects prompted the least recognition with 69.8% of respondents (2,677) unaware of it and only 65 (1.7%) having used it. However, given that fans were most likely to know of the project (1,095 or 28.5%) if they were vidders or heard of it through fans involved in making fan videos, this still seems like a fairly high level of awareness. In response to Question #5 only 618 people had declared themselves to be fan video makers.

Given the general lack of knowledge about Fan Video projects in Question #79 it’s not surprising that this choice came in last as one of the top three options (6.5%) with about double the remaining people choosing Open Doors for one of those slots (532 or 14%).

News About the OTW

Questions #81 and 82, which dealt with OTW news and information, had high rates of people skipping the question. Question #81 was skipped by 32% of survey takers.

Question #81 asks about which of 9 distribution/communication platforms respondents either used or were aware of. Of the 4,052, or 67% who did answer, the highest response was for AO3 administrative posts, with 77.6% or 3,146 claiming to be aware of it. This outlet was listed separately from the OTW’s various Twitter accounts, which includes AO3_Status and ao3org, and had the third highest response, 1,699 or 41.9%. Chances are that many more people are now aware of the Twitter accounts and the admin posts due to the archive slowdowns. Over one weekend over 1000 additional people began following AO3_Status, which is by far the most followed of any of the OTW news outlets with 6,463 readers.

The second highest response was to the OTW website with 1,862 or 46%. This number was largely consistent with those responding to Question #84 where 1,772 or 35.7% claimed to have read the website before (a difference of only 90 people). Remaining responses were the otw_news mirrors at fannish sites such as LiveJournal or personal RSS feeds for 1,139 people or 28.1%, the Fanlore community on Dreamwidth at 973 or 24%, and 547 people (13.5%) who listed OTW gift merchandise as a point of organizational awareness. 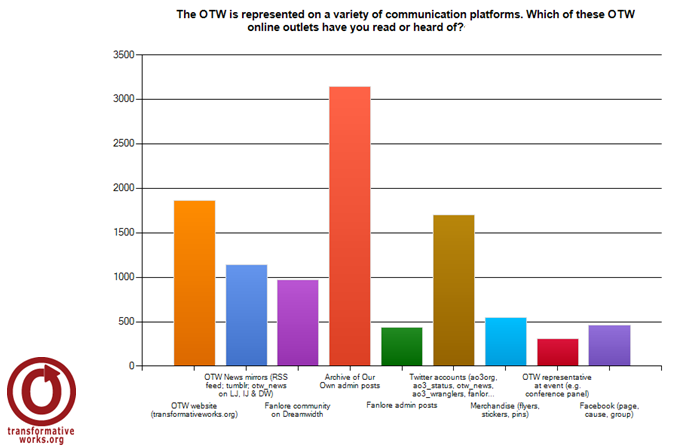 The highest response was “Word of mouth” (46 people) where the respondent “overheard” or saw discussion in their fannish circles. The people doing the discussion were generally those who work for the OTW as staffers or volunteers. 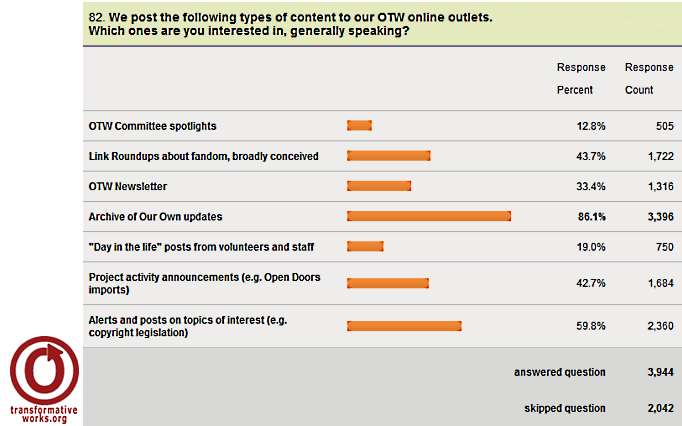 Question #82 also had a high skip rate, with 2,042 or 34% of people not answering what sort of news they were interested in. Of the 3,944 people who did answer, 3,396 or 86.1% claimed to be interested in news about the AO3 through its updates. This number is slightly higher than the people who answered in Question #81 that they were aware of AO3 administrative posts. This suggests that Question #81 either split people who were following news on the AO3 site vs. its Twitter accounts, or else people previously unaware that such news existed were now interested in receiving it.

The second highest news of interest was about specific topics or alerts on matters such as on copyright legislation (2,360 or 59.8%). The third and fourth highest response rates were very close, with 1,722 people (43.7%) interested in the fandom Links Roundup posts, and 1,684 (42.7%) interested in project activity announcements other than those for the AO3. 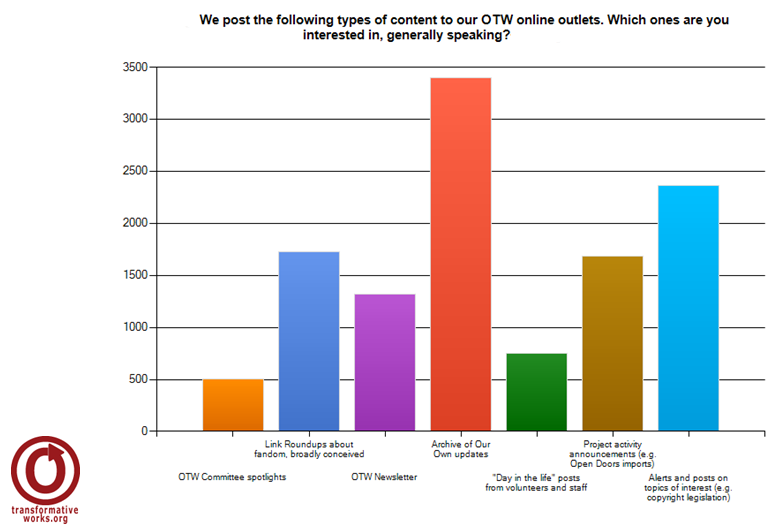 At the bottom of the news interest scale was information about the inner workings of the OTW. The OTW Newsletter had 1,316 or 33.4% following it. There was then a steep drop for volunteer role posts, of interest to 750 or 19%, and OTW Committee Spotlights with 505 (12.8%).

Overall, questions #81 and 82 suggest that at least a third of respondents are either uninterested or completely unaware of news related to the OTW and its projects, and that the greatest interest is for information of changes and updates to the AO3. Of more significance for the overall survey results, and OTW Communications strategy, is that despite the varied communication outlets the OTW maintains, the footprint of people it reaches is relatively small, at least if the news is related to things other than the archive.

The final question, #83, asked survey takers “What type of content would you like to see (more of) on the OTW online outlets?”. Only 614 people answered this, resulting in a skip rate of 90%. In fact, the number should have been higher because it appears some people believed that all questions required a response for them to continue with the survey. The largest group of answers was “Don’t know” or even random characters to create a response (212 or 34%). Although at least one of the “Don’t knows” was such a dedicated survey taker that they commented about how they would have felt guilty in leaving the question blank!

An additional group of respondents, 48 (8%) mentioned that prior to taking the survey they had been either unaware of the OTW or of its news outlets so they didn’t feel qualified to offer any suggestions. Given some of the comments made in response to this and other questions in the survey it seems that one of the survey’s successes was in alerting users previously familiar only with the AO3 as to what the OTW was and what sort of things it did. Some people were quite interested in finding out more once they realized this, with one respondent even suggesting that the OTW run another survey in a year’s time as they would be interested in taking it again once they could sufficiently answer more of its questions. Others, though, declared themselves uninterested in OTW news or any of the org’s other aspects as they were interested solely in utilizing the AO3 (32 or 5.2%).

Of the people who did offer specific suggestions, the responses were quite varied and indicated that people took this question to mean a variety of things. Despite its following a question listing examples of what news content the OTW produces, some fans seemed to take “its outlets” to mean “things posted on the archive.” For example, 20 people (3.2%) asked for “how to” types of information, most of it focusing on features of the AO3, although some of it was in regards to information about volunteering. Another 47 people (7.6%) suggested that the OTW get deeply involved in producing fanworks, highlighting specific fanworks, fans, or fan groups, hosting fanwork contests, posting fanfic recommendations, etc. Some suggested that it should revive metafandom, a non-OTW fannish newsletter which linked to fandom meta posts hosted on LiveJournal (and later for a time, Dreamwidth) or, indeed, produce its own meta posts.

This last tied in with the group of people who made specific suggestions for content the OTW already produces (94 or 15%). A few of these people were expressing support for particular types of content that they liked. In other cases they seemed to be unaware that things they wanted were already available. This could be expected given how many users made it clear that they were either somewhat or very unfamiliar with the OTW and were previously unaware of any of its news outlets. An exception were a few requests for an outlet at Tumblr. While the OTW had had a blog registered there since 2011, the Tumblr outlet was only officially launched a month after the survey closed. (Hopefully those fans have now found us!)

In other cases the unfamiliarity was likely due to the variety of projects and outlets the OTW has which people simply have not come across. In regards to the request for meta posts, the OTW’s academic journal Transformative Works & Cultures (TWC) hosts a Symposium blog and is continually seeking new contributors to it, whether they make recurring or one-time posts. Similarly, some people asked for “academic articles” or “research about fans” which is the purview of the TWC, links to news about fans, which occurs several times a week in the Links Roundup, OTW newsletters, which go out once a month, or information about the organization which can be found at the OTW website, such as where people can find news.

This group of respondents, however, was considered separately from people who either asked for more of the content already being created, or were looking for specific types of content which they might or might not already be aware of (49 or 8.4%). The largest group of these answers focused on legal matters, requesting more information about cases affecting fans, or activities of the OTW’s Legal Committee. Open Doors was also a project cited several times, with an interest about fannish preservation. Other people asked for more news about specific volunteers (which have occasionally been made as “A Day in the Life” posts), about specific committees, for more frequent and detailed information about technical developments at the AO3, etc.

Another set of answers, which we grouped under the term “transparency”, targeted more news about either OTW finances or its governance (41 or 6.6%). Another set of requests asked for greater representation of fans outside of western media fandoms, or of fans in non-English speaking countries (21 or 3.4%).

And lastly, 49 people (8.4%) declared themselves satisfied with what the OTW was producing in the way of news and information.

We have received questions since our last post that involved the AO3 section of the survey and we are still compiling some of the questions requested as well as awaiting some input from the related committees. We expect that those will be posted later in July.

In the meantime if you have an interest in some of the survey questions check out our list of all of them and tell us what you’re curious about for the upcoming Survey Sundays!