This week on Survey Sunday, we’re taking a look at some stats regarding fannishness and fanworks in response to the following question:

These questions read as follows:

Given that this survey was targeted at people aware of the OTW and likely to be in a fannish community where the survey link was shared or distributed, people were overwhelmingly likely to identify as fans. The “not sure” responses are probably a much more common answer outside of OTW user circles. Many people tend to see their fandom as tied to particular properties at a given time, or tied to particular activities, rather than being a constant part of their lives, so the answer may fluctuate or be difficult to define. Given that many respondents to this survey are AO3 users and it is a multifandom archive likely to be appealing to those who view or create fanworks for different fandoms, they are probably among those fans whose fannishness is a more continuous thing.

Question #5 asked about where people spent the majority of their fannish time. There were a few surprises here but on the whole the answers fell into some predictable areas. A total of 5611 answered this question, 375 people skipped it. 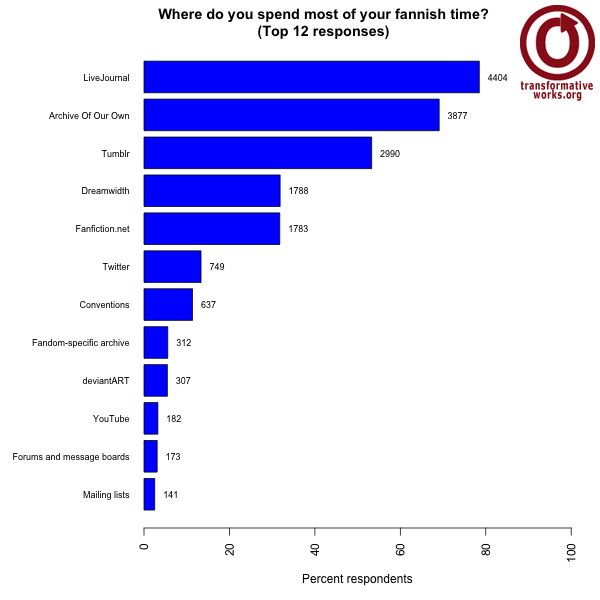 The survey request was distributed through the OTW’s news outlets and to all AO3 users. Thus five of the top responses seem to follow those distribution outlets with LiveJournal, AO3, Tumblr, Dreamwidth and Twitter being heavily used. Of some interest therefore is that two of our news locations, Facebook and Insane Journal, are far down the list. Facebook is 15th on the list with 124 respondents (2.2%) coming after Pinboard and miscellaneous fandom websites. InsaneJournal came in at #18 with 80 respondents (1.4%).

One place where the survey was not directly distributed, Fanfiction.net, had a very high response rate. Given that this survey was launched and closed in April, it’s interesting that use was so high by so many survey takers even before the site began to delete content, which has been sending many new writers and readers to the AO3. Chances are that number would be even higher were the survey to be launched today.

We are still looking at the sites with fewer than 2% of respondents to see how we can present that data in a clear way, as it is a long list with many places getting fewer than 25 people citing them.

Question #6 showed that those responding to the survey have been around the fandom block for a while. The responses cluster under the 15 year mark, but tail out to 50 years! 5515 people answered this question, 1 person provided “9000000” as a response, and 471 skipped the question. While a significant number of respondents have been in a fandom for fewer than 5 years, the majority have not. This may again be connected to awareness of the OTW, as such knowledge seems particularly likely among fans who are deeply networked and have been involved in various fandoms, as opposed to being fairly new and possibly active in just one online fandom location. 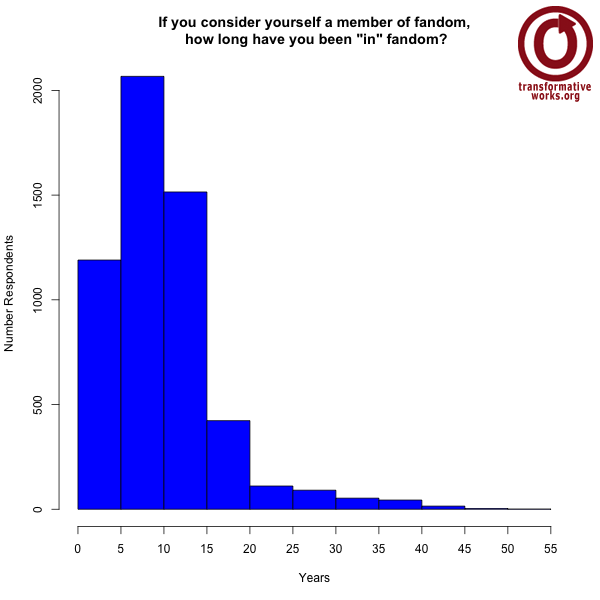 The responses broke down in the following way:

For those wanting the quick version we have:

Also, congratulations to the 208 respondents (3.7%) who have passed their silver or golden fandom anniversaries!

Question #7 had a write-in portion and 179 people skipped the question (3% of total). The results shown below are incomplete since they reflect only 93% of those who answered the question. Write-in results are still being compiled.

Only 11 people who answered the question did not interact with any of those fanworks. 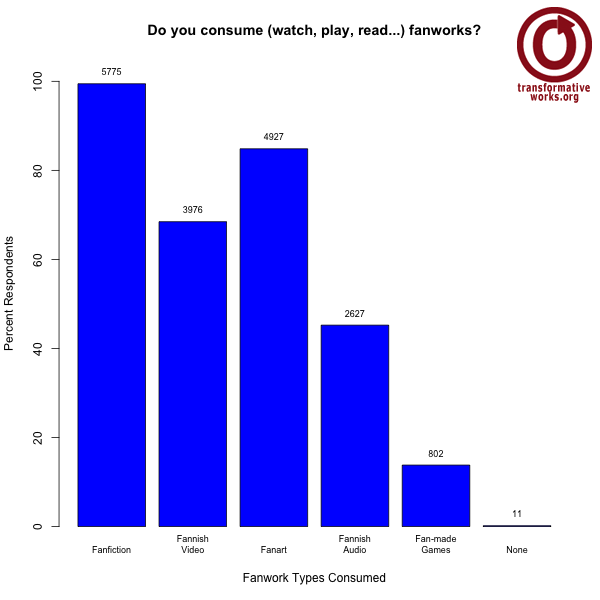 The graph above plugs this data into a visual look at the difference in consumption among different fanwork formats. 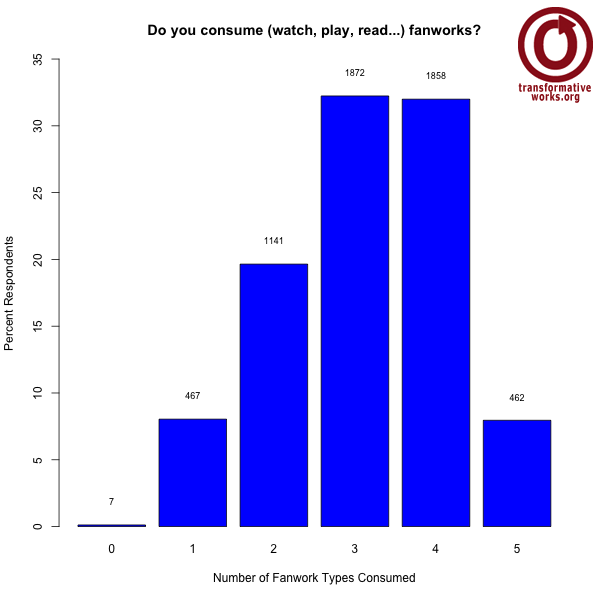 This graph above shows how many different types of fanworks people were involved with, the highest result being 3 kinds and the lowest being none. These numbers break down as follows:

So the percentage of people who look for only one kind of fanwork (primarily fanfiction) is the same as those who look at all the options listed.

Question #8 on the other hand asked people what they themselves created. More people skipped this question, 322, or 5% of total respondents leaving us with 5664 responses.

As might be expected far fewer fans create fannish content than use it. For example, while in terms of numbers of people the gap between the 93 people who create fannish game content and the 802 who use it is roughly the same as the gap between fanfic writers (4,238) and fanfic readers (4,927), the difference is large in terms of percentage of producers vs. consumers — with producers making up 11% of the gaming users but 86% of the fanfic users.

Since we saw through Question #5 that around 70% of respondents use fanfic archives for their fannish activities, and sites like the AO3 and Fanfiction.net are sites hosting primarily written text at this time, this gap likely indicates that those who do focus on multimedia forms of content may not have received the survey in the first place, since their main platforms for activity are likely elsewhere. For example, fanart, which is often paired with fiction, was highly represented in Questions 7 and 8, whereas fan crafts came in 3rd, and fan videos and audio came in for a more distant (but virtually identical) 4th and 5th place in terms of production, with gaming content last. It will be interesting to see if in the future more multimedia fan creators become aware of the OTW once artists, vidders and audio creators are able to host their content directly on the AO3.

The graph above plugs the question data into a visual look at the difference in creation of fanwork formats. These break down as: 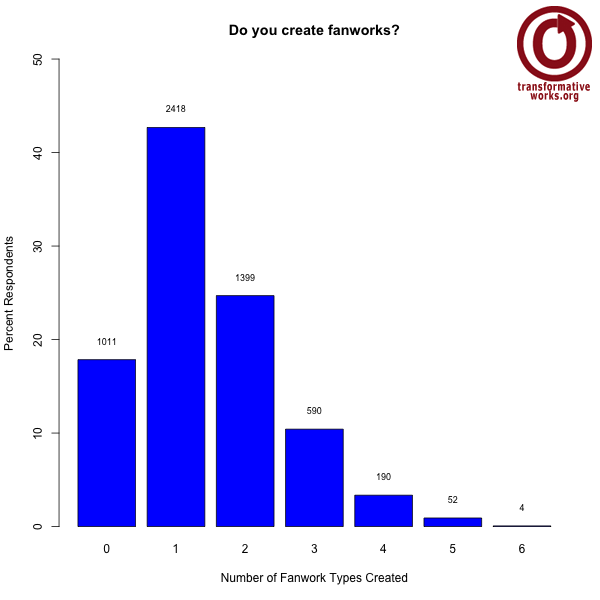 This graph shows how many different types of fanworks people created, the highest result being only 1 kind (usually fanfiction) with over 40% of respondents. The results break down as follows:

The results here differ notably from Question #7 as the number of people listing no fanworks created comes in third in percentage of respondents instead of last, and very few people create all six categories listed (though they clearly have mad skills!)

Check out our list of all the survey questions and tell us what you’re curious about for the next Survey Sunday post on July 1!