The following post was written by Heidi Tandy from our Legal Committee, who represented the OTW at Comic Con

Were you at Comic-Con this past weekend, or did you follow the online news, announcements, surprise appearances, news leaks, first reactions and photos that covered Twitter, tumblr, Instagram, blogs, Facebook and journaling sites — and inspired nearly a dozen fics on An Archive Of Our Own?

The OTW was on site in San Diego, covering Comic-Con for the first time with a small team of reporters and bloggers; we couldn’t be everywhere (although none of us slept much) so we’d love to hear your stories and see your photos! Please link to them in comments; if you’d like us to include your pics, please share only photos where the people visibly pictured are on a panel, are celebrities, or have given permission for you to share the photo with us at OTW to use on the site.

Team OTW met many of you at A Meetup Of Our Own on Wednesday night, where we chatted about fandom, panels we most wanted to see at Comic Con, strategies for coping with the lines for autographs and to get into Hall H and Ballroom 20, and whether we’d get to see sneak previews of shows and films, or advanced copies of books, comics, games and toys. Authors Scott Westerfeld and Sarah Kuhn joined the party, and it was a relaxing way to get ready for the excitement and frenzy of the next few days. 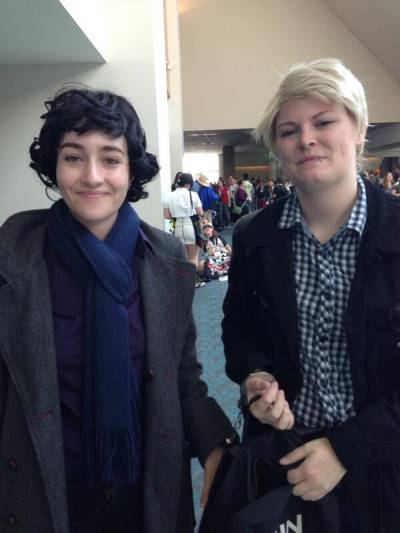 On Thursday, some of the longest lines were for HASBRO exclusives, Marvel’s “Coulson Lives!” t-shirts and Ballroom 20, where two shows – Intelligence and Star Crossed – were showing pilots before the Sherlock panel. Hall H was comparatively quiet. Before the doors opened for panels and presentations, we met fans in long and short lines, talked to costumed attendees about gender-swap cosplay, ran through a few rounds of Cards Against Humanity and looked over the schedule of events. This year, moreso than ever before, attendees with smartphones – or even just text messaging plans – were able to know what was going on at the other end of the con via Twitter or find out about last minute offsite event guests, like Tom Hiddleston on Sunday afternoon at Zachary Levi’s NerdHQ. @HallHLine and @Ballroom20, as well as organizational Twitter accounts like OutsideComicCon and SD_Comic_Con and panelist accounts like Marvel’s @AgentM and @GeekandSundry were continuous sources of information this year.

An audience of fanfiction lovers!

On Friday afternoon, an overflow crowd gathered at the “Why Fanfiction Is Taking Over the World” panel. Fanart has become commonplace at SDCC, as Marvel hosted a fanart gallery at the offsite Geek & Sundry location.

Video screen at the FOX booth

FOX’s booth showcased Teen Wolf fanart and memes during the actors’ signing while BBCAmerica did similarly at their offsite Doctor Who meetup. DeviantART sponsored Artists’ Alley and some of their staff were featured on various panels. But while many of the authors at signings and on panels at SDCC have backgrounds in fanfic, only the general Fanfiction panel on Friday and a Twilight panel of fanfic writers spent full sessions on fanfiction. However, people in lines and in rooms between panels read stories on their smartphones, tablets and laptops, sharing recommendations with and occasionally reading aloud to those sitting near them. 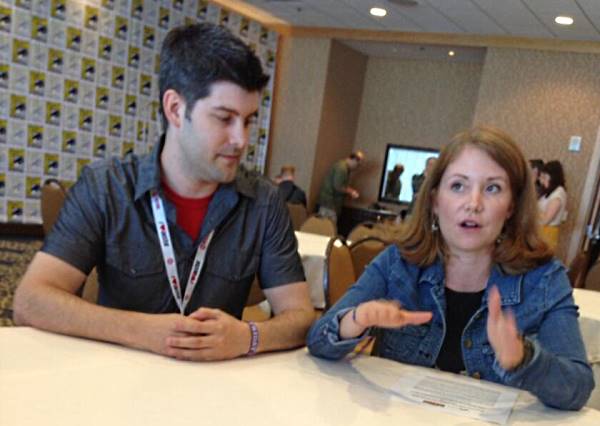 “How It Should Have Ended” creators interview

Simply connecting with the people in line around you was a great way to learn more about fellow attendees’ fannish pursuits during the other 51 weeks of the year. Presenters like the team behind the “How It Should Have Ended” videos talked to us about their unexpected transition from fanboys and fangirls to creators of a webseries that people – including Damon Lindelof – are now fans of.

Indie movies played almost around the clock at the Marriott, and Rob Benedict of Felicity and Supernatural premiered Sidekicks, a film impacted by his experiences interacting with fans of that show at cons over the years. Gingerhaze, who’s well known for her original art as well as her fanart, created awesome, inspired drawings at the BOOM! booth just opposite Marvel’s massive signing-and-selling-and-celebrating area. Felicia Day celebrated strong female characters, Neil Gaiman hugged MarkDoesStuff and praised his read-alongs, and John Barrowman fanboyed everything (except Stephen Moffat, it seems).

For many, Friday included a Veronica Mars experience, as the show-turned-movie took over Hall H in the middle of the day, as well as a Horton Plaza movie theater that night. The film is currently the largest Kickstarter-funded project, as it brought together thousands of fans and millions of dollars to partially fund the cost of this major motion picture. (See the cast panel entrance) Perhaps because of Kickstarter’s impact on a range of fandoms, this year Comic Con included more panels than ever on crowd-funding, self-marketing and transitioning to professional writing, costuming and art.

Team OTW spent much of Saturday and Sunday talking to fans in lines, outside panel rooms, and amid all that, we were also in the press rooms, interviewing the creators and casts of Almost Human, Lost Girl, Adventure Time, The Originals (with a question to Julie Plec about The Tomorrow People, too), Supernatural, Teen Wolf and Black Sails. We asked casts and showrunners about how they’re inspired by fan creativity, why they think their shows inspire fans, and how they look at fan reactions, legal issues and social media. We’ll be bringing you excerpts from these conversations over the next week. 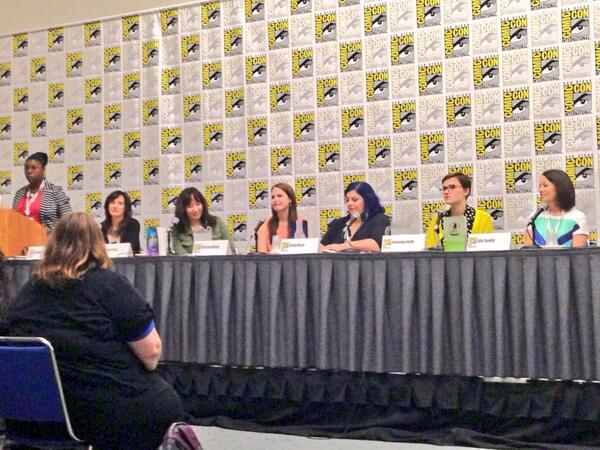 While we went to Comic-Con with a plan to focus our attention on fan creativity and legal issues, random bits of “entertainment news” fell into our laps, and we had to make spontaneous decisions about how to share such news, while keeping OTW’s coverage itself focused on stories related to our mission, site and advocacy issues.

If you were at Comic-Con or the OTW Meetup, we’d love to hear from you, and include your words, images, and videos in our coverage and collections. Comment with links to your posts or videos, or to photos of yourself or panelists. If you’re including people other than yourself and/or panelists in your links, please make sure you have the permission of anyone whose face can be seen in the photo.