Rush hour on the AO3!

As many of you will have noticed, we had some site slowdowns and 502 errors on the Archive of Our Own over the first couple of days of the year. Apologies for the inconvenience! If you’ve run into this problem and been wondering what was going on, you might be interested in this: 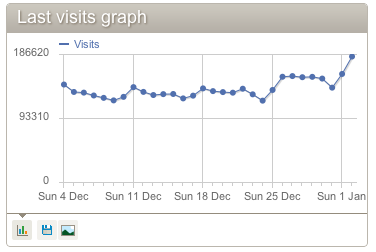 Yes, it looks like lots of fans decided to celebrate the New Year with some delicious fanworks. On Monday 2nd January we had 182,958 visits, and over 1,066,216 pageviews! Furthermore, an octopus swam off with our servers – volta_arovet’s Texts From Cephalopods has had 46,301 hits at the time of writing! So, our servers had plenty of work to do!

Over 2000 new users have joined the Archive in the last couple of weeks, and we have hosted several great challenges, including Yuletide (2598 works!), Due South Secret Santa (a more modest 34 works), and Homestuck Ladyfest Exchange (124 works). So, while we’re sorry to have had some slowdowns, overall we are super pleased with how well our shiny new servers have held up – those of you who were with us during the holiday season in previous years will remember that the high traffic of holiday challenges made our old servers very sad.

Looking forward, we’re not too worried about performance in the immediate future – there are some code improvements we know we need to make which will improve matters a lot, so those will be high priority. If the AO3 continues to expand at the same rate as this year, we will be looking at more servers sooner rather than later. But in light of the graph above, we’re pleased that while we certainly slowed down, we didn’t grind to a halt! Thanks to all the coders and sysadmins who did the work to make this possible, and thank you to all the OTW members whose donations helped us buy those hardworking servers (we are always grateful for volunteers or donations)! And, of course, thanks to everyone who reads and posts on the AO3 – we’re excited to welcome so many of you!

Once again, apologies to those of you who have been affected by the slowdowns – but hurray for so much beautiful fannish activity!