We’ve been talking a lot recently about how much the AO3 has expanded over the last few months. One easy statistic for us to lay our hands on is the number of registered accounts, but this only represents a tiny portion of site activity. Our awesome sys-admin James_ has been doing some number crunching with our server logs to establish just how much we’ve grown, and provided us with the following stats (numbers for June not yet available). Thanks to hele for making them into pretty graphs!

Visitors to the AO3 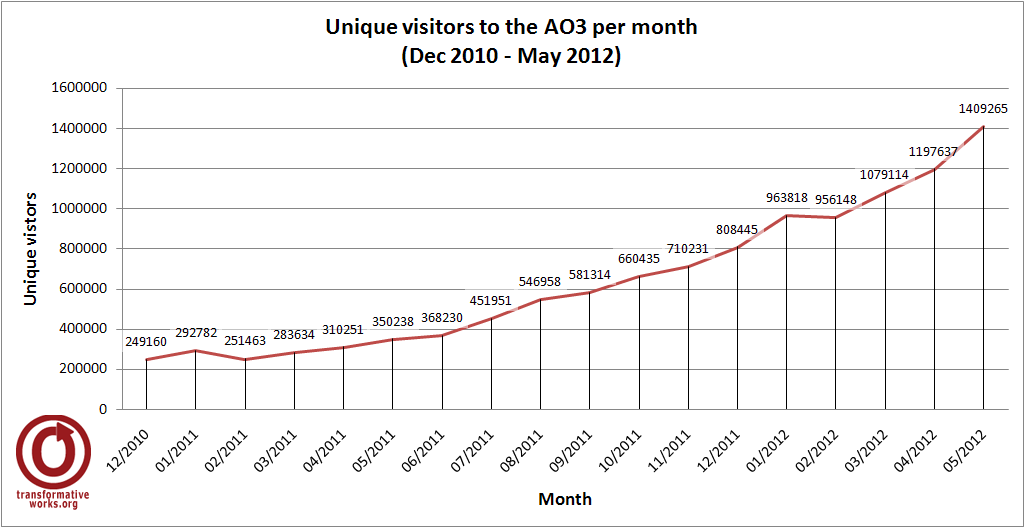 The number of unique visitors to the site has increased almost every month since December 2010 (each unique IP address is counted as one visitor). There are a few points where the rate of increase gets more dramatic: there was a jump of 244,587 across December 2011 and January 2012, compared to one of 137,917 over the two months before that. This can probably be accounted for by the fact that during December and January, holiday challenges such as Yuletide bring more people to the site. This theory is borne out by the fact there was a slight dip in the number of visitors during February 2012, indicating that some of the extra traffic in the previous two months were ‘drive by’ visitors who didn’t stick around.

May 2012 saw a steep increase in the number of visitors: there were 211,628 more visitors to the site than there had been the month before! The rapid increase in visitors was not without its price: this was the month of many 502 errors!

Traffic to the AO3 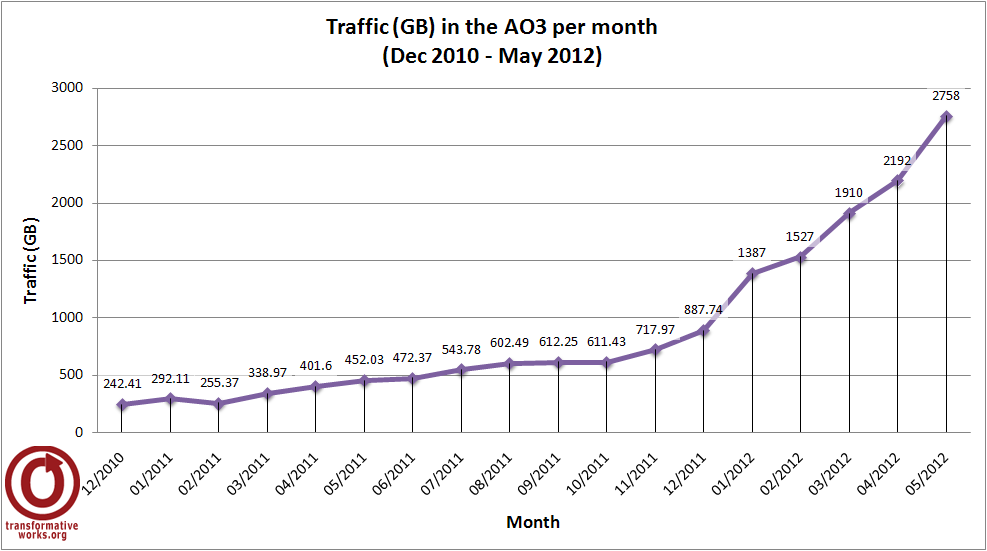 The increase in the number of visitors to the site has also been accompanied by an increase in overall site traffic (how much data we’re serving up). Again, there’s a significant spike during December/January. Interestingly, there’s no dip in traffic for February 2012, showing that even though there were some ‘one time’ visitors over the holiday period, there were also plenty of people who stayed and continued to enjoy fanworks on the site.

And the other stuff

With these kinds of numbers, it’s not surprising that there’ve been a few bumps along the way. For information on how we’re dealing with the growth in the site you can check out our posts on performance and growth and accounts and invitations.

Many thanks to our dedicated volunteers for their hard work dealing with the growth of the site, and to our fabulous users for their patience with our growing pains – and for creating the awesome fanworks so many people are flocking here to see!