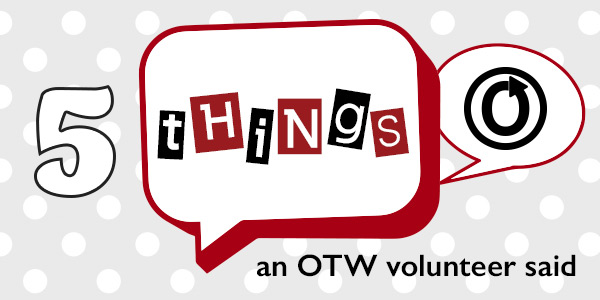 Every month or so the OTW will be doing a Q&A with one of its volunteers about their experiences in the organization. The posts express each volunteer’s personal views and do not necessarily reflect the views of the OTW or constitute OTW policy. Today’s post is with Acts of Tekla, who volunteers with the Open Doors Committee.

I volunteer with the Open Doors Committee, which helps archive owners move the fanworks on their archives to the AO3 so that they stay online and accessible even if the original archive can no longer be kept up. We work with Translation and Communications, to create import announcements; Tag Wrangling, to make sure that the imported works are tagged appropriately; and Systems, to redirect old archive URLs to their new home on AO3.

We also sometimes work with Legal when there are questions about whether we can preserve something and still abide by our mandate to preserve privacy and creators’ control over their works. Sadly, the answer is sometimes that we can’t — one reason that everyone should designate a Fandom Next of Kin!

The OTW’s position is that fanworks are inherently of value, and this means that they are also worthy of preservation. I know that a lot of people find their old works embarrassing (and there are several ways that they can opt out of imports or claim and delete or orphan works afterwards if they so choose) but I think it’s really important to save these older works. As a collection they’re an irreplaceable record of fandom history, but more importantly, they were all created from a place of love and creative passion, and it would be a real shame to just let that vanish without a fight.

I work on Open Doors stuff two evenings a week, two or three hours at a time. I also keep up with our internal chat channel. Most of the emails we get are from people with questions about upcoming imports or who need help claiming works from a completed import. We also commonly get inquiries from archivists interested in importing their archives, or alerts from concerned users about archives that are at risk. I probably spend about a quarter of my time on basic responses, and the rest on the more complicated work of moving archives through our import pipeline. We have good procedures, but every archive is different and so something new always comes up!

I applied to volunteer in 2014 because in the 15 years I’d been in fandom, there had been sweeping changes in the community and in technology, and I’d seen countless archives and individual works vanish without a trace. Every so often I’d think of a fic I’d loved and go to reread it, or follow an old rec list, and find that the work was gone. I wanted to help preserve works that someone worked hard on, and that other people loved.

I was brought on in anticipation of the Yuletide import. I’ve directly handled around a dozen archives since then!

Is there anything you’ve worked on that you found challenging or memorable?

In October 2019, Verizon announced that they were deleting all Yahoo Groups content on December 14 -– barely two months notice. Since Yahoo Groups had hosted a lot of fan content in the 2000s, people understandably panicked about the possibility of losing all of that fandom history, and Open Doors got a flood of requests from moderators who needed help preserving their content. Open Doors worked with other OTW committees,the Archive Team, and others to publicize the content purge, ask for volunteers to help access and download archive data, and lobby Verizon to hold off for just a bit longer.

We were somewhat successful –- the Archive Team was able to rescue data from thousands of groups, thanks to numerous volunteers, and Verizon did hold off for a couple of extra months –- but we know that we still lost a lot, and despite promising to keep the mailing list side of Yahoo Groups open, Verizon announced in October that it would be closing completely and for good on December 15, 2020. I’ve been through several fandom purges like this, and it always hurts.

However, Open Doors has been working with individual mods to import content from their old Yahoo Groups to the AO3, and we’re very excited to be making those works available once again!

I say that I write fic, but the reality is that I mostly think about fic that I want to write, sometimes manage to write it down, and occasionally get it finished enough to post. Mostly, I like squeeing over and analyzing whatever it is that I’m into at the moment with my OTW and offline friends. I describe myself as a serial fandom monogamist — I’m only into one thing at a time, but that one thing changes every few weeks. There are some I regularly cycle back to, though — for example, on the first day of autumn, I always watch Over the Garden Wall, and then I’m all about that for the next 3 weeks!