Today the Archive of Our Own passed the 1 million fanworks mark!

And now, just four years and two months later, AO3 has over 1 million works representing 14,353 fandoms! The site has over 270,000 registered users (with at least 1 million unregistered users visiting each day) and is still growing. AO3 currently issues 750 invitations a day, so if you’re not already registered, now is a great time to join the Archive.

What does this mean?

AO3’s rapid growth shows the ever-increasing number of fans creating and sharing fanworks online. This site is still relatively young, joining a long line of fanwork archives, from those created to host a single fan’s work to the many dedicated to individual fandoms, characters and relationships; particular topics or genres; specific languages or countries; or formats and connected fandoms. We want to honor and celebrate the millions of fanworks that have come before those found at AO3 as well.

The sheer number of visitors to AO3 also represents the importance of fanworks to the everyday life of millions of people internationally. Whether fans are creating, commenting, sharing or viewing, they engage in fannish activities every single day — something that’s never more clear than when the Archive can’t be accessed! We will continue to work hard to keep your fanworks available for a long time to come.

Finally, the Archive is one of a very small number of open-source projects founded and largely staffed by women, another contribution fans have made to the internet as a whole. Many women who were not previously involved in technology have learned new skills in the name of fannish activities, and the AO3 is proud to stand as a shining example of this growth.

As part of our celebration today, what could be more fitting than more fanworks? If you’d like to create a fanwork today and connect it to our milestone, tag it with “AO3 1 Million”.

Even if you’re not posting a new work, you can still join in by sharing your favorite works. If you have a Twitter or Tumblr account, you can use the “Share” button on your favorite works and tag your posts or tweets “ao3million”. (Wouldn’t it be great if we could get this important milestone to trend?)

And if you aren’t already following us, don’t forget to join us on Twitter at ao3org or Tumblr at AO3 News! One of our volunteers, Rachel G., has made the following graphics for you to snag and repost to let everyone know that you are an AO3 user who is celebrating today. 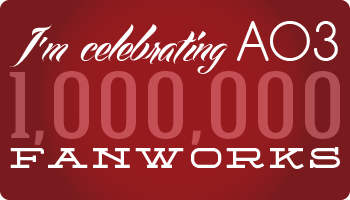 The future of the Archive

So what does the future hold? Well, that’s entirely up to you! The Archive would be empty without the fans who post their works or interact with the works of others, and it wouldn’t exist without the hard work of fans who volunteer to develop features, organize tags, respond to users, and keep an eye on performance. We all owe those volunteers, past and present, enormous thanks for giving us this site to use.

We would also like to thank our fellow fans who have contributed financially to AO3’s parent organization, the Organization for Transformative Works, in order to fund its development and keep the treats flowing to fans around the world.

If you value the AO3 and are able to help support it, please bring a gift to today’s virtual party celebrating this milestone. And if you can’t, we hope you’ll spread the word to those who can.

Thank you to everyone who has helped us reach this exciting day! We couldn’t have done it without you.