Happy Ada Lovelace Day from everyone at the Organization for Transformative Works!

Celebrating women in technology is a subject close to our hearts: when the OTW came into existence in 2007, one of our major motivations was the desire to give fans control of the tools and infrastructure which support fannish creativity. The predominately female fannish communities from which the OTW emerged have a long history of mastering new skills and sharing expertise for fannish pursuits — the vidders of the 1970s were pioneering mashup techniques decades before they became trendy! — and we want to extend that skill-sharing to the creation of a fan-owned home that welcomes all fans.

The vast majority of OTW volunteers identify as female, and the amazing things our teams have achieved demonstrate that they all deserve to be considered tech heroines! Below, we highlight the work of our tech-focused teams and the individual voices of some of our staff and volunteers.

Archive of Our Own

The AO3 is the major tech project for the OTW, and is supported by several committees and volunteer groups: Accessibility, Design, & Technology; Systems; Support; Tag Wranglers; Coders; and Testers. We’re one of the largest female-majority open source projects in existence, and we’re proud that in less than four years we’ve developed from nothing more than a cool idea to become a thriving site with more than 23,000 users.

Last Ada Lovelace Day we polled AO3 volunteers to find out a bit more about them, and we thought we’d repeat the experiment this year. The charts below give a summary of their answers: 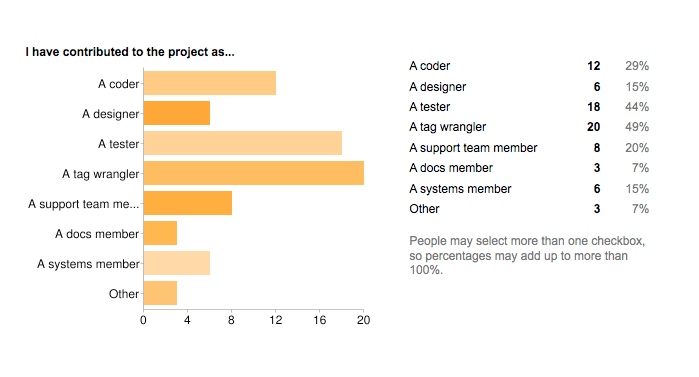 We’re still very definitely a female-dominated project; however, we’re interested to note that since last year the number of volunteers who identify as male has increased by 10%. We think this reflects the fact that we are focused on making a welcoming and supportive environment for people to gain new skills. As Skud pointed out in hir 2009 Oscon keynote, making a project welcoming for newbies is particularly beneficial to women — who are often excluded from traditional tech contexts — but that doesn’t mean it becomes less welcoming to people who aren’t women!

Not all the contributors to the project are coders or sysadmins; the AO3 also relies on the work of testers, tag wranglers, support staff, designers, and docs writers. We value their contributions just as much: a tech project is about more than lines of code, and without them the AO3 wouldn’t exist.

A key part of our goal is giving fans (whatever their gender identity) the skills to build the tools they want to use. We were super-proud to see some of the fruits of this mission during the recent Delicious debacle, when fannish talk quickly turned to “We should build our own bookmarking service — if the AO3 could do it, so can we!” Our volunteers have achieved so much — they’re all tech heroines (and heroes)!

The AO3 team would like to give special thanks to one particular tech heroine — Sidra, Systems co-chair and primary guardian of the servers for the AO3. The Accessibility, Design, & Technology Committee have posted a separate post celebrating Sidra’s awesome work.

Another major technical undertaking for the OTW is Fanlore, our fannish history wiki. Since Fanlore is built on existing MediaWiki software rather than a custom-built application like the AO3, the tech aspects of this project are not as immediately obvious, but they are just as important. Our Wiki staff have learnt to maintain and use the MediaWiki software, creating custom templates, investigating new software modules, and getting to grips with wiki maintenance. They are awesomely assisted by our Systems team, who installed the software on our servers and keep everything running smoothly (we love you, Systems ♥).

Fanlore is celebrating Ada Lovelace Day with a new challenge on Women Characters, Science Edition! Why not create a Fanlore article about your favorite female character who is a scientist, engineer, or mathematician? Tell us about your fannish experiences with these characters — the women themselves, the relationships they’re in (het, lesbian, canonical, fannish, etc.), the fanworks they star in — whatever you can think of! You can stub out a new page, or add a sprinkle of information on an existing page.

If you’ve read this far, you’ve probably realized that Systems is involved in every OTW project. They tend the AO3 servers; install software for Fanlore, Transformative Works and Cultures, Open Doors, and the main OTW website, plus the software that helps us process donations and manage volunteers; and set up the mailing lists that help all the committees and volunteer groups do their daily work. The heroines and heroes of the Systems committee work largely behind the scenes to keep our technical infrastructure running smoothly, and the entire OTW benefits enormously from their dedication and expertise.

The Webmasters are another committee whose work is spread among a wide variety of projects. They maintain the OTW’s main website, the Open Doors site, and the Elections site, manage our donation processing software, serve as layout coders for Transformative Works and Cultures, design styles for the OTW’s social media accounts, and manage media hosting for various internal projects. To date, the Webmasters have all been women, and have been largely self- or peer-taught in the technical skills they use.

Some thoughts from our volunteers

In a post that celebrates women doing it for themselves, it seems appropriate to close with some thoughts from our volunteers, as they reflect both on their own work and on that of other women they admire. We’ll be adding links to individuals’ blog posts at the end of this post throughout the day.

It’s exciting to work in teams that are overwhelmingly female. I really like the testing parties, as it’s a little confusing and intimidating to try to work from written descriptions. I joined to support an organization I trust and approve of, and to get some practical tech experience. I just started volunteering a few weeks ago, so not much to say yet!

Sometimes I have conversations about servers, code, etc and I realise that former!me wouldn’t have understand ANY of it. I’ve only learnt enough to contribute a tiny amount of code, but I am able to be a fully functioning member of AD&T because I have absorbed enough to be able to take part in these conversations as a useful laywoman.

I like finding interesting bugs and feel good whenever I find one before it hits Beta.

I like that the archive tries to accommodate a variety of people and systems instead of saying: get browser x with y settings or we don’t care about your problems.

I love wrangling big fandoms with lots of problems and characters-shared-between-fandoms, it’s a big undertaking but it’s nice to see everything all neat once you’re done!

Since I come from a background of relatively no coding, it has been really exciting to submit my bug fixes and see my changes on the archive! The whole experience has been really rewarding!

Since beginning my work with the Archive, I have improved my computing skills dramatically. I have learned a great deal about linux and switched to a more complex, text-based distro. I have gained an exceptional amount of skill and confidence with unix commands and bash. I now have an understanding of how the Archive is put together via Ruby on Rails, and that understanding deepens and develops with every issue I work on. This has been an amazing experience and I am excited to keep learning and growing as a coder!

I’ve never been part of a mainly women-identified group before, and it’s really been rewarding for me in so many different ways. I’m so proud to be part of the OTW!

It combines two of my dearest hobbies: Coding and fandom. Both Open Source people and fandom people build great, communicative communities with lots of collaboration, and if you put those two together you get fun squared. 😀 It’s really great to share more than the passion for coding with my fellow coders, so when I’m in a phase where I code less in favour of writing or squeeing over a new shiny fandom, it’s never really off-topic, thus making it easier to keep in touch with coding stuff.

[Something I’m proud of accomplishing.] Dragging a committee up from its bootstraps at the project’s launch, in such a way that it perfectly well survived (and prospered after) my own burnout-related crash and burn.

I really love it. I quit grad school in a blaze of disillusionment and have been unemployed and completely at sea in my life since, and it’s been really heartening to have something I can contribute to in small ways, especially something that’s part of fandom, which has been such a wonderful aspect of my life for so many years.

It is one of the more nurturing and family-building projects/organizations I’ve seen.

It’s a delight to work on a project where people not only don’t jump to assumptions about you, but where people are supportive even if you make the smallest contributions.

ruby metaprogramming! redis! There is just nothing quite so fantastically satisfying as working with a smart and dedicated and passionate team on a project that we all actually use ourselves and value deeply as a result.

I’ve really enjoyed being AD&T training lead, running sessions for new people to learn how to code from scratch, and mentoring them as they advance. It’s so rewarding to see people gaining new skills, and particularly when you know they’ve previously been excluded from opportunities because of their gender or disability, e.g. by lack of part-time courses that can fit around childcare or flare-ups.

I’m *so excited* to be part of the team that’s creating the Archive that I love so much. I think fandom is amazing to have worked so hard together to create the Archive.