The OTW Board has had a number of discussions in the past months related to elections and Board workload. We’d like to talk about the three main results of these talks: we have decided to

Below, we’ll elaborate on our reasoning for expanding the Board, the options we considered for the 2012 election, and the bylaws amendments. We’ll also be presenting an explanation of seat-tracking.

The bottom line: the Board will be expanded to nine people, and there will be an election this year for the two brand new seats. Any retirements between now and the 2015 election will be used to achieve an election cycle of three seats every year, as per the amended bylaws.

We’ve been talking a lot about Board workload recently — the OTW has grown significantly over the past four years, which means more liaison work, more scope in Board work, and an overall increase in workload. Expanding the Board may even give us the opportunity to have Board members dedicated to non-liaising managerial and administrative work, strengthening the structural core of our organization.

However, this expansion does not come without a cost. In some ways, a small Board makes it easier to meet and work together, discuss and gain consensus. A large Board also takes energy from people who might otherwise be doing different staff work, meaning there are fewer people and people-hours left in the org to do non-Board tasks.

But we think the benefits outweigh the risks, and so we will be changing from a seven-member board to a nine-member board. Our bylaws do not specify the number of Board members, but we are also amending them to make it clearer how elections will work. It is possible to change back in the future if the larger Board is found to be too impractical, or the balance of pros and cons shifts due to other changes.

This, along with some other considerations, will of course affect elections.

The resignation of two Board members in 2011 created a dilemma about the 2012 election. This post from 2011 describes the issue; in short, the OTW’s bylaws called for an election to take place every year, but the resignations put us off the normal election cycle, creating the possibility that there would be no open seats in 2012. Last year’s Board decided to leave the choice of how to handle this up to to us, the 2012 Board.

So this year, we considered a few options. We have four people who were elected in 2011, and three from 2010. We all expected to get three-year terms, and it was not determined which of us were stepping into the seats from resignations and would therefore have shorter terms: the election returned an equal cohort and did not rank candidates or assign specific seats.

While the bylaws as they currently stand do mention vacancies due to retirement, they do not specify the length of terms for those replacing retirees(1). This, combined with our firm principle of electing equal cohorts, leaves us with the situation described above.

However, the bylaws do not specify a term length. This means that if someone steps down early, whoever fills their seat does not necessarily serve a short term: if necessary, the Board can declare that term to be a full three-year term in order to synchronize with an appropriate election cycle, or, likewise, the seat can be declared short (not necessarily matching up with the remainder of the retiree’s term) for similar purposes. This gives us a fair amount of flexibility in how to address the seats and elections issue.

Below are the options we considered, the relevant bylaws amendments, and all the details on seat-tracking.

We will be amending the bylaws to (a) accommodate a two-seat election this year, followed by three-seat elections every year thereafter; and (b) to clarify procedures around retirement and vacant seats.

The relevant section of the bylaws is excerpted below, with changes in bold.

Election and Term of Office. At least two (2) Directors shall be elected yearly, and if the Board has nine (9) or more Directors, at least one-third of the Directors shall be elected yearly. The election may be held at an annual meeting of Members, or the Directors may be elected by written consent; provided, however, that, if such consent is less than unanimous, all of the directorships to which directors could be elected at an annual meeting held at the effective time of such action are vacant and are filled by such action. If, at the time set for an election, the number of declared candidates is equal to the number of open directorships, and notice is given to Members, then consent to the candidates’ election may be deemed given unless any Member objects. All Directors shall hold office until their respective successors are elected or appointed.

4. Vacancies. Vacancies in the Board of Directors may be filled by a majority of the remaining Directors, though less than a quorum, or by a sole remaining Director. Directors so elected shall hold office until their successors are elected at an annual election. In cases in which a Director is appointed or elected to fill a vacancy due to death, resignation or removal, the new Director will hold office for the remainder of the former Director’s term, and the Board may specify procedures for identifying such slots in subsequent elections.

In plain language, this means that we can add two seats this year, but after that we’ll have nine seats and will elect three seats every year. Meanwhile, Board members appointed to vacated seats are expected to serve out the remainder of that term, but the Board can decide how to handle those seats when it comes to elections.

The nitty-gritty of the seat-juggling necessary to reset the election cycle is pretty complicated. If you’d like to see the details, we’ve put together some diagrams and explanations below.

The image below represents the cycle of seats up for election. Along the top are displayed the years. Elections take place between years and are represented by dashed vertical lines. Individual seats are displayed horizontally: each row represents one seat through the years. The seats are arranged in groups representing the election cohorts: each cohort is elected together and, barring early retirement, steps down together. The groups are staggered so that we have an election every year, with one group of seats up each year. This runs on a three-year cycle, with two seats up (Group A), then three (Group B), then two (Group C), and then we start over again with Group A, who have now served out three years, leaving those seats available for election once again.

This turnover within each group is represented by slight changes in hue when a new person steps into that seat by election or appointment. Group A is various shades of green, Group B purple, and Group C blue. So for example, the light purple shade in Group B from 2008-2010 represents Francesca Coppa, Naomi Novik, and Rebecca Tushnet. After the 2010 election, the colour changes to darker purple to represent the newly-elected cohort of Francesca Coppa, Ira Gladkova, and Kristen Murphy.

Because we elect equal cohorts, the seats are not differentiated except by the election cycle on which they run (i.e. which group they belong to). However, if you look down a column for any given year, you can see where each seat is in its election lifecycle. In 2010, Group A seats were in their first year, Group B seats in their last, and Group C seats in their middle year.

This next image represents the state of affairs as of the beginning of the 2011 term. We elected three members in the 2010 election (Francesca Coppa, Ira Gladkova, and Kristen Murphy). Shortly thereafter, a member from Group A (Elizabeth Yalkut) retired. At this point, Hele Braunstein was appointed to fill the vacant seat. Seats with some form of turnover that does not coincide with the group’s election cycle are represented by diagonal stripes.

However, in the 2011-2012 election, both of the Group A members stepped down, ending their terms early. Those seats, as well as the two from Group C, went up for election, and four members were elected for three-year terms. This effectively moved what used to be Group A’s election cycle back one year. This leaves us with only two cohorts (represented by blue and purple).

At this point, we propose to add two seats — Group Z, represented below in orange — which will go up in the 2012 election (this year). Note that Group Z runs on the same cycle as the now-obsolete green Group A. This gives us a 3-4-2 cycle (B, C, Z — that is, purple, blue, orange).

Now all that is left is to reset the cycle to have three seats every year. There are several ways this can happen, depending on Board member attrition.

If one of the blue-seated members steps down in time for the 2012 election, that seat will have fallen on the same cycle as what used to be Group A, which puts it in sync with Group Z. That seat can then go up for election on a three-year term. The other obsolete Group A seat, occupied by a non-retiring member of the blue cohort, will continue running on the same cycle as the other blue seats, fully integrated now into Group C. The end result is three seats per group; the redrawn group and election lines are shown in red.

This option resets the cycle with the very next election, and means all election seats will be for three-year terms.

If a blue-seated member retires at some other time, their vacant seat will be filled by appointment to a short term in sync with Group Z. That particular seat may go without election until 2015, but its occupant will still have changed, participating in overall Board turnover. This is represented in the below diagram: no election line is shown for that seat until Group Z’s turnover at the end of 2015.

This is also the scenario that will be applied if no one retires voluntarily: if no one else opts to retire early, one of our blue-seated members has indicated willingness to step down in 2013 with one year remaining in their term.

If, on the other hand, someone from Group B retires, their seat can immediately be converted into a Group Z seat, filled by appointment or election depending on timing. This would give us three Group Z seats, but only two Group C seats and four Group C seats, with the two B seats up for election next. That’s not enough seats to comply with the one-third rule, and so we would still need to ask someone from Group C to step down early. In this case, that seat will be converted to a Group B seat.

Any of these scenarios will give us the necessary distribution. The end result will be a new group arrangement: 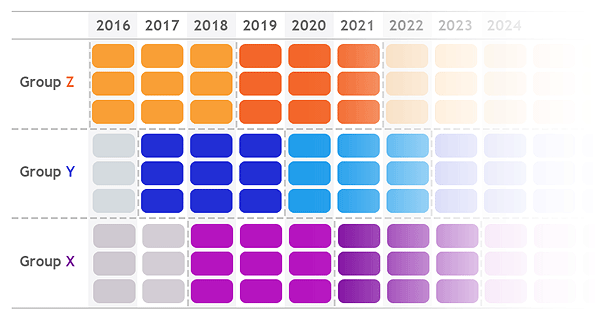 If you have any questions, please feel free to ask here, or contact our Elections Officer using the elections contact form.

(1) “Vacancies. Vacancies in the Board of Directors may be filled by a majority of the remaining Directors, though less than a quorum, or by a sole remaining Director. Directors so elected shall hold office until their successors are elected at an annual election.” OTW Bylaws. (back to the post)

2 thoughts to “2012 Election: Expanding the Board and Amending the Bylaws”