Happy New Year everyone! The OTW is looking forward to new developments this term and one thing we want to celebrate are some milestones that have been passed at the Archive of Our Own in the last few weeks.

Back in 2010, we wrote a post heralding our first major milestone when we reached 100,000 works less than a year into our beta. (We should point out that another OTW project, Fanlore, also hit the 100,000 edit mark that same year!)

While we still have a large body of users awaiting accounts, currently around 10,000, this is down significantly from the 30,000+ that we saw through the latter half of 2012, and we hope to decrease the wait further in 2013. It seems likely that Archive use will continue growing strongly this year, possibly even repeating 2012’s feat of more than doubling its user base.

Engagement With the AO3

As the following graph shows, there has been a distinct jump in various activities on the AO3 during the past eighteen months. User growth appears almost steady compared to reader activity, which can be seen clearly in the increase of bookmarking, commenting, and subscriptions. 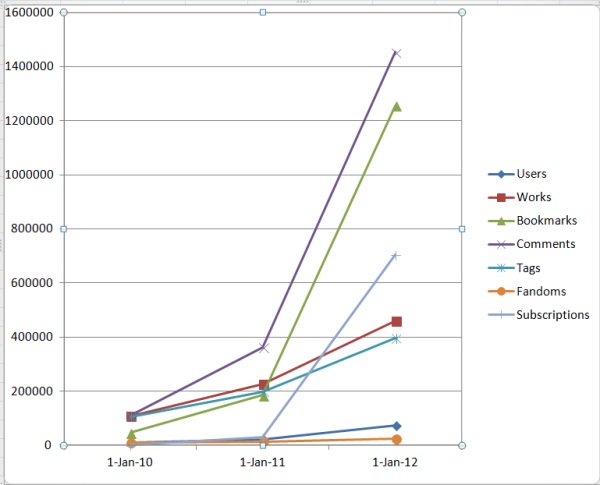 However as this second graph shows, all of these numbers are eclipsed by the enormous jump in kudos activity. While the early years of the AO3 saw use primarily as a storage site for authors’ writing history, current use is clearly favoring active searching, reccing and participation from readers. 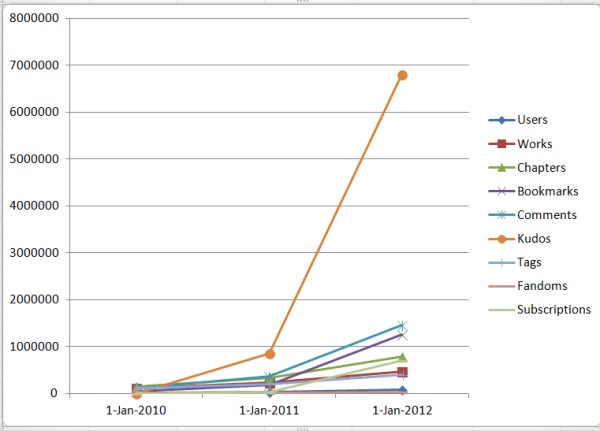 Growth of the Site

While the Archive had to discontinue unique visitor counts in the spring due to the load on the site, we are averaging 80 million page views per month. Another way to look at the growth of the site is with the following statistics, comparing items from AO3’s launch in September 2008 to September 2012.

Collections weren’t added until 2009. Their creation statistics are as follows:

There are now over 1400 top level collections. Many of these have subcollections for yearly challenges/events, giving us over 2600 collections in total. Yuletide, for example, has 10 subcollections, but only the main Yuletide collection appears in that top-level listing.

We’re looking forward to seeing what fan creators and AO3 users bring to the archive in 2013 and we’ll keep working to improve your experience on the site!

Mirrored from an original post on the AO3 News blog. Find related news by viewing our tag cloud.