We’re providing both textual and graphic explanations of the process, and cover how to cast your vote, how we tally the results, and plenty of examples. There’s a short version for those who just want the basics, and, below the cut, a long version for those interested in the details. Let’s go!

How to Cast Your Vote

How We Tally Results

We’ve had several awesome contributors put together graphical representations of the process, as well as a text-based walkthrough and a step-by-step look at some sample voting data in raw tabular form. Take a look!

Below is a macro view of the process, representing votes by aggregate as slices in a pie chart. 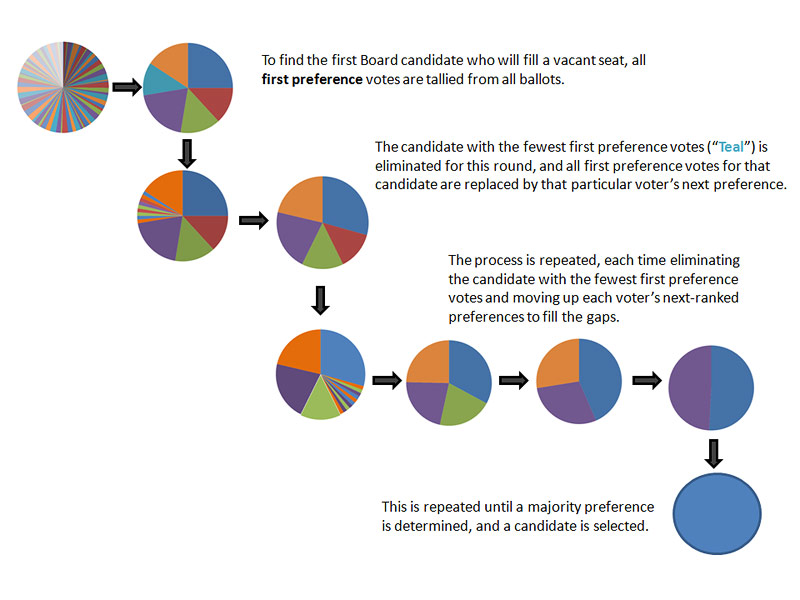 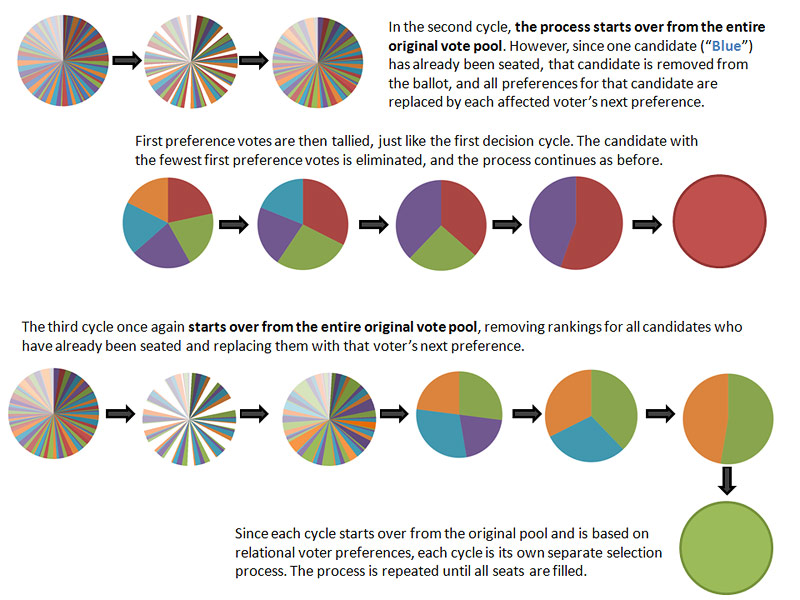 Please note that Purple, who was last to be eliminated from the first cycle and had many first preference votes in the first round of that cycle, did not get a seat in this example. Meanwhile, Red, who had relatively few first preference votes in the first cycle, won a seat in the second cycle. Wondering how this can work? Check out the next set of images, which shows how the votes move around!

This next set of images provides a closer look, taking a very small data sample and showing the individual votes and how preferences cascade as candidates are eliminated. (Click on the images for full-sized versions.) 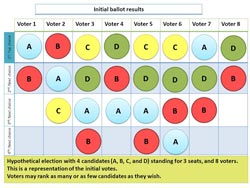 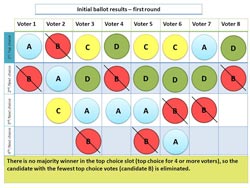 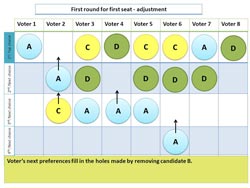 The rest of this set of images, as well as the long version of the IRV explanation, the text-based example, and the tabular example are all below! 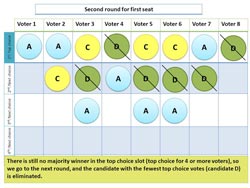 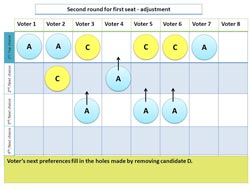 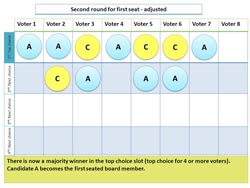 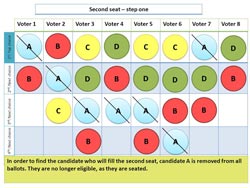 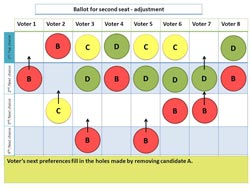 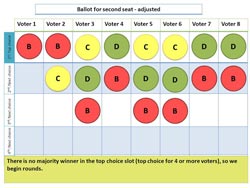 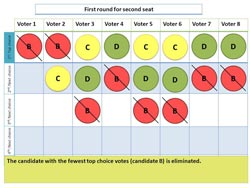 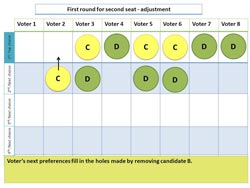 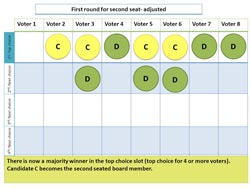 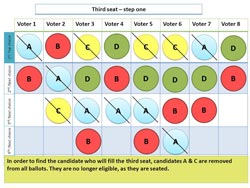 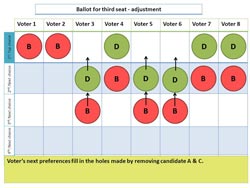 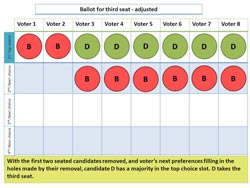 Please note that B had the most votes overall, but is the only candidate to not win a seat, because those votes were lower-preference.

Instant Runoff Voting is an election system that allows a decision with a single round of voting by asking voters to rank their choices in order of preference. The biggest advantage of this system for our purposes is that generally, this eliminates the need for additional balloting to break a tie and elects an equal, rather than hierarchical, cohort of candidates.

IRV is a system that determines only a single winner, and as the OTW elections are meant to fill all available board seats without establishing a hierarchy or ranking for the incoming members, the decisions software is reset after each round of seat selection to determine each winner — but this time with elections staff editing the ballot to delete the winner of the previous seat. This removes the winner, and their rankings, from the results, leaving all of the other candidates, and their rankings, in place. Any gaps left by the eliminated candidates are filled by cascading each voter’s preferences for the remaining candidates, in the same manner as the example above where a voter picked only a second and fourth preference. The system then automatically tallies the votes again, returning a second winner.

This process nearly eliminates the need for tiebreaker votes. If there is a tie and there are enough seats available to seat all the tied candidates, then all those candidates are seated and, if necessary, the process can continue. If there are not enough seats for all tied candidates, then the number of second preferences votes for those candidates will be tallied next, and so on until the seats are filled. Only in the extremely unlikely event of a tie for insufficient seats where all preferences match exactly is additional voting necessary.

It is important to understand that this system revolves around relational voter preferences — all candidates in relation to each other, rather than absolutely. This is what is behind the cascade of preferences as candidates are eliminated, and also what allows this system to fill multiple seats with no hierarchy among the elected candidates. The cascade of votes makes it difficult (as well as undesirable) to draw clear hierarchies, even in the first cycle, where the candidate with the most votes overall is not necessarily the candidate who will end up with majority first preference and win a seat.

Here is the process across multiple cycles, step-by-step:

Cycle One (if there is no clear majority winner):

Where things get tricky is in Round 2, where you return to the initial ballots, but then the election staff eliminates the winner of Round 1. Then, if there is no simple majority after votes are tallied, they eliminate the candidate with the least number of first preference votes:

The third round also starts over from the entire original vote pool, removing votes for all candidates who have already been elected and substituting that voter’s next choice.

Since each round starts over from the original pool, based on voter preferences, each round is its own separate selection process.

To see an example of raw voting data in tabular form, check out this series of spreadsheets: IRV Spreadsheets. This works from the same data as the above example, but follows on from the first cycle through all four cycles. Click through the sheets, numbered at the top, to watch the process in action. This example also includes a tie, showing how the modified IRV process nearly eliminates the need for tiebreaker votes.

Wondering about the placeholder slot? Here’s how that works: our balloting system allows voters to rank all candidates, independent of the number of seats — so if there are 7 candidates, all 7 can be ranked. However, a recent security upgrade to Drupal’s decisions module — the software we use to run the election — changed this. The software now allows voters to rank all but one candidate — so if there are 7 candidates, you would only be able to rank 6 of them.

For this reason, we have added one extra “candidate” to the ballot: a placeholder candidate that will take the unranked slot. You can still leave other candidates off your ballot, or you can choose to rank them all.

We apologize for this somewhat awkward workaround, and hope to modify the software before next year’s election so that it will no longer be necessary.

We’d like to thank the many contributors who have helped make this post possible, including Aja, Allison Morris, Candra Gill, Ira Gladkova, Kristen Murphy, Renay, and Seventhe Dragomire.

We hope this post has helped you understand the voting system and given you tools to help plan your vote. Happy voting!

One thought to “2011 OTW Elections Voting – The Process!”